I moved to Birmingham in 2001 and so I have travelled up by train on the day before Christmas Eve every year since. Over the years my younger sisters have moved out and have preferred to spend this day with whatever boyfriend they have had at the time, so it has traditionally become a day for me and mum.

My tree this year

Today’s experiences have been very similar to those of the last five years. I got an early train, managing to avoid the mass exodus of half the population of the city, I battled against the high velocity winds and rain that always seems to accompany a visit to Manchester and I witnessed an old lady getting accidentally slapped in the face with an extremely large sausage roll. It wasn’t anything sinister – a woman was eating it, the wind blew it out of her hand and straight into the face of an unsuspecting elderly lady walking past. I shouldn’t have laughed, but I did. (I’ve said it before and I’ll say it again, I’m a bad person). I arrived at my mum’s house to be greeted by her three hyperactive and rather smelly dogs. I immediately changed into a clean pair of jammies, plonked myself on the couch and laughed at the dogs gleefully shredding the stuffed animals that I had brought them from Christmas. Mum made some lunch and after we had eaten we put on a James Bond film and that was the last thing that I remember – I slept for several hours and awoke to Noel Edmund’s ‘Deal or No Deal’ blasting from the TV.

There’s something extremely comforting about being here, even at 32 years old. It’s warm and cosy, the dogs are asleep and as I write my mum is in the middle of her soap opera marathon, which she delights in telling me the storylines, despite the fact that she knows I don’t watch them. There’s an opened box of chocolates between us, the remnants of what was a teddy bear shredded on the floor and I keep getting a hint of pine from the enormous tree that is standing proudly in the corner of the room.

It is this scent that is quintessentially the essence of Christmas, evoking hundreds of memories from years gone by. 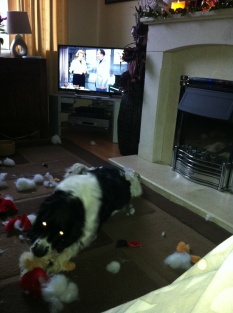 The dog shredding his present, with White Christmas on the TV.

We’ve always had a real tree. The house that I grew up in had a large living room and we would buy a seven foot monster and spent hours decorating it, adding to it every year with the various toilet roll based decorations that we had created at school. The 23rd December would be an excruciatingly exciting time – we had bought and wrapped our presents but weren’t able to put them under the tree as we had a beagle, Patch, that once took it upon herself to eat everything, including the bath salts, which she promptly threw up later in the day. Our activities often depended on the weather – it would occasionally snow and my sisters and I would build a snowman, we would watch all the Christmas specials on the TV, we would order a takeaway- a special treat – from the local pizza place and I would spend every December 23rd watching the clock and desperately wishing for time to pass quickly.

As a teenager I attempted to be a little more ‘cool’ about the notion of Christmas, but secretly I was just as excited about it as I was as a young child. I counted down the days, then the hours and then began clock-watching on the 23rd. As I grew older I got a part – time job at McDonalds (not the most exciting job I’ve ever had) and so December 23rds were spent working, after which I would return home with offerings of left over Big Macs and Veggie Burgers, much to the delight of my father.

After I turned 18 and was legally allowed to drink, my sister and I would go out on the day before Christmas Eve, and this was a tradition that lasted for several years. We indulged in many silly activities, but one in particular stands out for me: We had enjoyed a brilliant night at Bar Juice and after eating pizza in a kebab shop we got a taxi home. It had snowed, our house was at the top of a hill and the driver was unable to drop us off outside, so we had to walk the rest of the way. Unfortunately, we were wearing high heels which wouldn’t grip in the snow and in our drunken state we ended up crawling up the hill on our hands and knees, laughing all the way. When we finally managed to make it into the house we were greeted by our less-than-impressed mother who became even less impressed when we both promptly threw up in the bathroom. Classy ladies.

As an adult December 23rds have been difficult over the years. My family split up and consequently relationships have been strained, and in some cases are now non-existent. We’ve lost various little friends – our beagle, Patch, and later our retriever, Ollie, but we’ve been lucky to find three more little friends to share our lives with. I am grateful for being able to spend this day with a wonderful mother and her smelly dogs, and I hope that there are many of these in the future.

In response to the Weekly Writing Challenge

17 thoughts on “Ghosts of December 23rds Past”