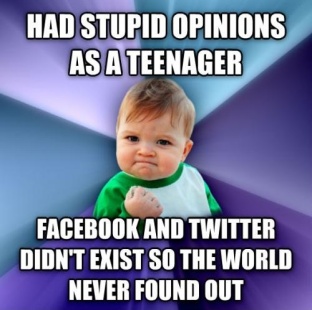 I’ve never been a huge risk taker – I’ve always tried to follow the rules and do what is expected of me. I don’t have any wild tales of drunken debauchery, I’ve never woken up in a strange place with a strange person… I’ve been quite a good girl in my time.

An ex-boyfriend requested my friendship on Facebook not long ago. I declined it – after fifteen years I have no reason to communicate with him and if I am being honest I haven’t really thought of him much in that time – but not before I snooped through his profile as much as his privacy settings would allow. He looked much older, he’d obviously been working out and he was the proud father to three kids. He seems happy, and I’m glad, but there was one thought that kept popping into my head during my little stalking session:

Thank god that wasn’t me.

He wasn’t a bad boyfriend and I’m sure he’s a brilliant father, but after seeing his pictures I couldn’t help but feel like I had dodged a bullet.

Hindsight is a wonderful thing.

During recent months I have spent some time reflecting on life, often culminating in thoughts of regret or nostalgia. However, here are the things that I am glad I didn’t do.

Getting the dolphin tattoo I so desperately wanted. I don’t like needles, the colour would have faded by now and I have gained so much weight it would now resemble a whale.

Borrowing money from an ex. He offered to lend me enough to get me on the property ladder. I’m glad I refused – I discovered that he was cheating on me not long afterwards.

Taking drugs. Plenty of my friends have dabbled on nights out, but I’ve never regretted not taking the risk. I have an addictive personality and bad luck – not a good combination.

Taking things further with someone I was seeing in my gap year. I found out that he gave his girlfriend after me syphillis.

Becoming a professional violinist. The competition is far too high – I wouldn’t have coped.

Getting my hair permed again. Blonde afro’s look great on some. I, however, looked like a reject from ‘Annie.’

What about you guys? Do you have thing in life that you’re glad you didn’t do?