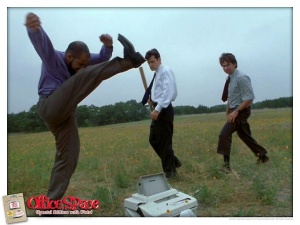 In the last ten days my routine has been print, file, print, file, print, file, sleep, aside from lunch with the best mate on Sunday and a lovely girly catch-up at MRH’s house, which was very much needed. I have printed and filed no less than 400 pieces of coursework since I went back to work after being off ill for a month, and if I never see another printer, photocopier or tracking sheet ever again it will be a day too soon. The printer at work has a grudge against me for some reason. It hates me. It seems to sense when the work is at it’s most urgent and will deliberately pretend that it is broken, despite being perfectly fine for the people that have used it just before me. I keep having fantasies about re-enacting the scene from ‘Office Space,’ where a printer is unceremoniously smashed into a million pieces. Unfortunately, I don’t own a baseball bat, but if I ever do you can be assured that the bloody printer is going to know about it.

Consequently, I have barely had time to even think about my blog. Despite the fact that it is the Easter holidays, I have been into work every single day this week to do extra coursework catch-up with the cherubs, and so I was really excited about the prospect that my time this evening could be spent catching up on what I’ve missed in the WordPress world. I tried to write something, but instead found myself staring at a blank screen, and after a while I gave up. It isn’t the first time that this has happened to me over the last month or two – I used to have lots of ideas that inspired me but at the minute all my brain thinks about is work and deadlines. I’ve been having dreams about being in a school that I don’t know and I can’t find my way around or figure out where my classes are. I try calling home but keep dialling the wrong number. Fun.

A much simpler life is needed.

However, tomorrow I am giving myself the day off. The Bloke has surprised me with tickets to London on Saturday so we’re going to have a wander around and play at being tourists for the day. I’m looking forward to it – we try and go several times a year and there are still so many places we need to visit yet, so it will be a nice change of scenery. This also means that I am going to treat myself to a new outfit to wear so I have decided that I am going to go into town tomorrow and have a look around. The weather is going to be beautiful, the day is mine, it’s the only one that I am going to have to myself for a while and I am going to take full advantage. That is, after I have watched cheesy morning chat shows and had a long hot bath. Oh, and I might make a start on the enormous dark chocolate Easter egg that The Bloke bought me.

After all, it would be rude not to…