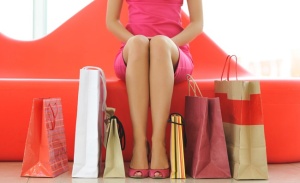 I went shopping this morning. It was quite a novelty for me – I haven’t been able to buy anything for months because of the astronomical bills I’ve had from the vets, but after a bad night’s sleep I decided that a little retail therapy was in order. The plan was to buy a new pair of jeans. However, it was bright and sunny and four hours later I found that not only had I managed to buy two pairs of jeans, but I had also seemed to find several summer tops to go with them.

I don’t usually spend much time shopping for clothes, even when I do have the money. I tend to dress like a teenage boy, usually wearing sweaters and jeans and I shop like a man – I shop alone (I can’t stand shopping with other people because I’ll inevitably end up sitting outside the changing rooms for half an hour waiting for whoever I’m with to try something on that they won’t buy), I know what I want, I go in, buy it and leave – but today I wandered around aimlessly, trying on lots of items and silently cursing the disgustingly fashionable girls who were effortlessly wearing outfits that I would look like a sack of potatoes in. I’ve managed to find a few things that I can’t currently afford but I will revisit in the summer, I enjoyed a nice breakfast, and I was able to take a little bit of time just for me.

It’s also the unofficial International Star Wars Day, so May the Fourth be with you! My best friend is at his Godson’s christening today. His Godson’s name is Lucas. It couldn’t be any more perfect – I have images of him saying “Lucas, I am your Godfather…” at some point during the day. Awesome.

Hope you’re enjoying the weekend! You can also find me on Twitter and Tumblr @suzie81blog and Facebook: facebook.com/suzie81speaks