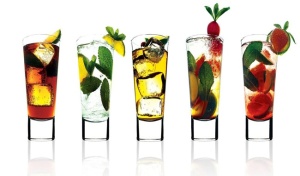 I’ve been in work today, on a day which would usually be my day off, and I really want a drink. I don’t want to get ‘off my face crawl on the floor covered in my own vomit’ drunk, just what my mother refers to as ‘merry.’

I’m not a big drinker. I used to be – in my late teens and early twenties I used to push myself to the very limits in alcohol consumption, simply because I could. However, I’m what can generally be termed as a ‘lightweight’ – one snifter of it is enough to send me silly and start telling poor unsuspecting revellers how much I like their shirt – so my version of an alcohol limit is most likely to be a lot lower than that of others. Despite this, it still didn’t stop me from giving it my all. I started as a classic binge drinker – I wouldn’t have anything for several weeks and then I would consume several weeks worth in a single night. When I moved to university and away from home and any element of parental control I started to go out almost every night. I got into a routine – I would get up, go to my lectures, spend the evening working in the local pub and then would go out drinking until 3.00am. I’d get up the next day and repeat the cycle, sometimes for up to five days in a row.

Looking back, I don’t know how I, or my body coped with such a routine. These days, a lengthy night out for me ends at 1.00am and is inevitably followed by the world’s biggest hangover. My once tiny items of clothing, selected specifically for the purpose of posturing around a nightclub have been replaced with classier, more sensible ensembles, and my six inch heels have shrunk by six inches. Gone are the days where I would spend hours attempting to ignore the excruciating agony that my poor feet were in, or braving minus temperatures without a coat in an effort to show off my new dress. It’s now extremely rare that I go to a nightclub – I prefer to spend my time in quieter bars, where a can sit down, hear what my friends are actually saying and enjoy the music at a level that doesn’t make my eardrums bleed.

I haven’t been able to drink for the last couple of months because of my hospitalisation a few months ago, and I haven’t missed it, but tonight I have a real urge for a cocktail – a Raspberry Mojito or an Amaretto Sours would certainly hit the spot!

What about you? Do you get the urge for something stronger than a glass of wine?

25 thoughts on “I Could Murder a Cocktail Right About Now…”