I’ve been struggling for the last few weeks with content ideas for Suzie81 Speaks. Perhaps this is because my priorities currently lie with work, but this is the first time that I have worried about having brain freeze that doesn’t seem to have subsided.

I follow a lot of great blogs, and one which I particularly enjoy is Phil’s musings over at the Phil Factor. His post this morning, ‘Lap Dances, Justin Bieber and The Talking Heads‘ gave me the sudden kick-start that I needed. His opening sentences were simply these:

This is one of those days when I woke up with no fully formed idea of what I was going to write about. Here are some of the ideas that were playing bumper cars in my brain:

Suddenly it hit me – my blog doesn’t need a theme, so why do I need a theme for a post? So, thank you Phil, here are the things that have been bouncing around my brain over the last few weeks…

I’ve decided that of all the jobs available, I want Jimmy Fallon’s. The Tonight Show isn’t shown over here, but thanks to YouTube I have recently watched him throw water at Lindsay Lohan and Jason Statham, play egg roulette with David Beckham, Nip Sync with Terry Crews and swap mouths with Tina Fey. I’ve also seen Jamie Foxx sing unsexy words in a sexy way and Will Ferrell and Chad Smith from the Red Hot Chilli Peppers have a ‘drum off.’ Best job ever.

I’m sick of seeing articles about the Kim Kardashian/Kanye West, or the ridiculously titled ‘Kimye’ wedding. I absolutely respect the fact that everybody should be entitled to live a private life and I think that it is disgraceful in the way that lots of celebrities are followed and harassed, but it always makes me laugh when publicity driven celebrities go over the top to claim that they want their privacy and then post pictures on various social media networks, have TV cameras following them around for their own show and sell their stories to magazines. How about we completely ignore them, stop watching their programmes and buying their music and let’s see how ‘private’ they want their lives to be when they realise the money isn’t rolling in anymore. That, or allow James Franco and Seth Rogan to replace them both full time.

I need a holiday. Not just a jolly down to the capital for the day, I need a week long trip to somewhere hot. Normally, when I go away somewhere I have just three requirements: a beach, a pool and a bar, and that pretty much covers everything I need for a week of sunbathing, swimming and sleep. My last adventure was to Naples in Italy and I loved it, but I haven’t been able to save enough money to go somewhere similar since then. 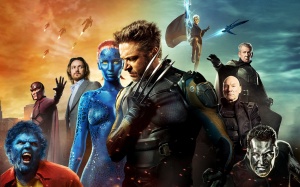 I went to see the new X-Men film today with The Bloke. I enjoyed it and am currently refusing to become involved in the inevitable paradox conversations that surround these sorts of films. It was good, Hugh Jackman continues to play a fantastic character in the role of Wolverine, (and he gets more attractive as he ages) and I was delighted that Peter Dinklage is being taken seriously for his acting ability rather than being used for his size – he’s a very talented man.

Why does having a ‘slim’ chance and a ‘fat’ chance mean the same thing?

And finally, I’ve been absolutely blown away by the response that I have had to my recent post ‘No Means No!’ If you have missed it, simply click on the link below and let me know what you think! As always, feel free to reblog and share it around!

What about you guys? Any random thoughts for the week?