Today I got out of bed at 2.00pm. This is an extremely rare occurance for me, but I was exhausted. This week has been mentally, physically and emotionally draining and I needed to just sleep. It’s been the busiest time at work – the students have finished the last sections of their course and I have submitted their results to the exam board (100% pass and all of them reached or surpassed their target grade), our orchestra and a capella group performed brilliantly on stage at one of the country’s best concert halls with the City of Birmingham Symphony Orchestra, and with only four weeks to go until the summer the little cherubs at work are getting a little restless.

On Thursday the school hosted an event called ‘Destiny Africa,’ in which we were honoured with workshops and a performance from children and young adults from the Kampala Children’s Centre in Uganda. These children, all of whom were orphans with individual experiences of loss, trauma and hardship were incredible – the enthusiasm, talent and sheer enjoyment of their performance left me feeling emotionally drained (I pretty much cried all the way through), and incredibly humbled.

I was feeling in quite a reflective mood this afternoon – The Bloke took me for a beautiful meal at my favourite restaurant by the canal, the weather was glorious and sunny and I took a moment to take in my surroundings. It’s moments like these that remind me of just how lucky I have been in my life and the experiences that I have been fortunate to have. I thought I would share some of these with you:

1. Performing Barber’s ‘Adagio For Strings’ as part of a large string orchestra on stage. It’s my favourite piece of classical music, and the emotion that this piece evokes can be so powerful it is almost overwhelming.

2. Sitting on the steps of the Lincoln Memorial at night, overlooking the Washington Monument. Absolutely stunning.

3. Swimming in an open air pool, surrounded by sunflower fields on a gloriously hot day in Le Mans, France. I kid you not, this actually happened.

4. Exploring London with The Bloke. We like to visit a few times a year if we can and each visit opens up a world of new places and things to see.

5. Moving into my first ever room in the Halls of Residence in 2001. Everything I had with me was my very own. I felt safe there.

6. Eating hazelnut ice-cream and crepes whilst looking out onto the Bay of Naples and Mount Vesuvius.

7. Watching a cellist play Bach’s ‘Air  On A G String’ outside the Sacre Coeur in Paris. 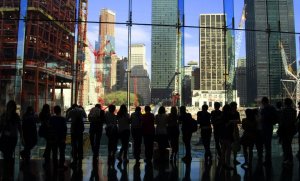 8. Visiting Ground Zero in New York, just as construction on the Freedom Tower had begun. An incredibly humbling experience.

9. Seeing Dali’s ‘Persistence of Memory’ in the MOMA in New York.

10. Running up the ‘Rocky’ steps (the steps leading up to the Museum of Art) in Philadelphia.

11. Watching dolphins swimming alongside us during a boat trip in Malaga.

13. Performing at the Proms on stage at the Royal Albert Halls in London with the BBC Concert Orchestra in 2000.

15. Choccywoccydoodah in Brighton, a specialist chocolate shop. We hired a room out for two hours and we could eat as much chocolate as we wanted.

16. Watching the sun rise on a beach in Malia, Crete.

17. Watching Bon Jovi at Hyde Park in London in 2010. It was the fourth time that I had seen them in concert (they’ve always been my favourite band) and the atmosphere was incredible.

18. Sitting by the Seine in Paris and watching the sunset.

19. Spending the day at a beautiful spa with my friend on my birthday.

20. Having a dinner party with some of my oldest friends. These often last for hours and get louder and more raucous as more alcohol is consumed throughout the night.

The children that I worked with this week were grateful to have food. Puts things into perspective doesn’t it!

What about you guys? What have been your best life experiences to date? What are you grateful for?