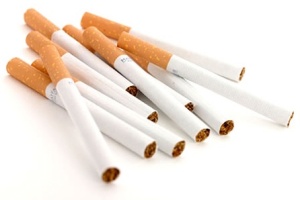 One of my nasty habits is that I enjoy a cigarette. I’ve smoked since I was sixteen, only cutting down and quitting at times since I hit my thirties.

I’m well aware that it is one of the biggest mistakes of my life. My health has suffered dramatically – I have a reduced lung capacity, I find it more difficult to exercise and I have developed a nasty cough on occasions, and over the years I have spent thousands on my habit.

I consider myself to be a reasonably rational and intelligent person, but I’ve gained nothing from smoking, and yet still can’t seem to completely quit. It’s almost like an emotional crux, often accompanying a drink, and there’s no better feeling than lighting up and taking that first drag after a stressful few days. I love it. For those first few moments all the tension, anxiety and worries disappear with each exhale.

Most of my friends are now non-smokers, having seen sense years ago and kicked the addiction, and with the smoking laws I often find myself outside bars and restaurants alone, quietly enjoying the nicotine rush by myself. Unfortunately, this also means that I seem to have a sign above my head that says ‘Free Cigarettes’ in neon flashing lights. Sometimes I oblige, but not as much as I used to. The other day, when standing outside the pub, I was approached by no less than three people in the space of just a few minutes, all of them asking the same question:

“Excuse me love, can I pinch a cigarette?”

I responded with a simple ‘no, sorry,’ to the first three. I only had a few left, and normally I try and be reasonably polite, but by the fourth one I was getting a bit hacked off. A fourth, however, was far more blunt:

I responded with an evil look and quite a snappy ‘no,’ and he seemed quite surprised at my reaction.

This isn’t the first time I have had a negative reaction from a scumbag. I remember a very drunken woman yelling at me because I was a ‘tight b*tch’ and that I have an iPhone so I ‘should be able to give out a cig to someone else.’ I don’t have a problem with helping people out – I help out who I can, when I can, I give to charity, I have adopted several animals, I buy food for homeless men and women when I’m out in the city, I fundraise, I give my stuff to charity shops and I collect items every year for an amazing homeless charity. I’m not a snob, and I don’t feel that I’m better than anyone else. The problem I have is the assumption that some people have that they are entitled to something for nothing, and that it’s acceptable to approach a complete stranger and abuse them when they don’t respond in the way that they’d like. Smoking is a luxury, something that I pay for with money that I work bloody hard for, and I’m getting a bit annoyed with those that assume that everything should be given to them for free, and get nasty when it isn’t. I’d love to be able to go up to a business person and say ‘give me some money because I want a bigger TV and a foreign holiday because you earn more than me,’ but I don’t, because I have what I have and I work for it.

It isn’t just smoking. It isn’t uncommon for people to ask to borrow my phone, or ask for 20 pence (what the hell is 20 pence going to get you?). There have even been instances where I have been eating a sandwich and have been asked for the other half, or in the queue at McDonalds and asked by a very drunken man behind me to buy him a cheeseburger (?!), but the smoking thing really annoys me. Buy your own bloody cigarettes!!!

What about you? Are you often approached by people in the street asking for things? How do you deal with it?

59 thoughts on “Buy Your Own Bloody Cigarettes!”