This series of conversational posts was created by Part Time Monster and are normally designed for weekends, but as last weekend was quite busy I thought I would use my day off as an opportunity to update my original post that I had prepared earlier.

If we were having coffee, I would tell you that I was absolutely delighted with the response I have received on the blog over the last few weeks. I haven’t been able to post as much due to work commitments, but the comments, emails and messages are still coming in! I miss not being able to write when I feel that I need to, and it’s great to know that there are those out there who still think of me when I’m not around. It’s much appreciated.

I would tell you that the #SundayBlogShare went very well the other day, with an enormous response to the hashtag on Twitter. I am doing it again next Sunday, and all are welcome whether they follow my blog or not. It proved to be a great opportunity for bloggers to meet others and share their posts, which I was really pleased to discover. 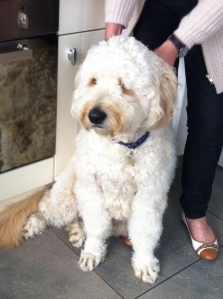 If we were having coffee, I would tell you that my weekend was filled with the nice company and lots of laughs. I spent Saturday with The Bloke’s family, including their 18 month old retriever, Charlie, and labradoodle, Harvey. I’ve never met a labradoodle before and instantly fell in love, leaving the house afterwards covered in slobber and dog hair. We visited the local shopping centre, had breakfast, did some food shopping and had a wander around the Christmas section in Marks and Spencers. They’re lovely, kind people, and I always have a good time with them. The Bloke and I drove back to Birmingham (during which I slept for most of the journey), we got changed and then went to my boss’s 40 birthday party, which was being held at an amazing local brewery. The buffet, music and atmosphere was great, and it was lovely to sit back and relax with my colleagues and their partners and have a drink. Sunday was spent at my friend’s house, who is a superb cook, and after she had spoilt me with a gorgeous roast dinner and homemade brownies we sat down to watch a film while her young daughter and daughter’s friend played with Barbies and Lego upstairs.

I would tell you that I’m excited about The Bloke’s birthday, which is on Friday. He’ll be 46 and hates his birthday every year, but I love to make a fuss of him. I’ve bought him presents that I know that he’ll like, and even though I can’t afford to take him out for a meal on the actual day, I have arranged that we will go to our favourite restaurant next week when I get paid. What he doesn’t know (and I can write this on here because he doesn’t read my blog) is that I am going to invite some of his friends to join us and make it a surprise.

If we were having coffee, I would tell you that I am feeling mentally and emotionally much stronger of late. Things have settled down after what has seemed like years of chaos. We’ve been in our new house for six months, everything is unpacked and has it’s own place, it’s warm, cosy and comfortable (even though I hate the curtains) and spending the evening watching some of my favourite tv programmes in a homely atmosphere with The Bloke and two sleepy is fast becoming one of the things I look forward after a long day.

I would tell you that I watched ‘Valley Girl,’ one of Nicolas Cage’s earliest films for the first time in years the other day. I had forgotten just how cheesy and how bad 80’s fashions were, but I loved it. There’s nothing better than a straightforward chick flick. It’s inspired me to think about potential 80’s costumes should a Halloween party arise.

If we were having coffee, I would tell you that I am tired, and particularly looking forward to the half term break that starts at the end of this week. It’s been a long eight weeks, and I am exhausted, so I’m planning to take a little bit of time just to relax and recuperate. I get paid during that week too, so I’ll be able to do a few things that I’ve been meaning to for a while.

I would tell you how sad I am to hear of the passing of Lynda Bellingham, an English actress, TV presenter and writer, who passed away yesterday from bowel cancer. She has been a prominent figure in the entertainment business as long as I can remember, and she was just 66 years old. She had known that it was terminal for a while, and only a few weeks ago she decided that she was going to stop chemotherapy in November so that she could spend one last Christmas with her family. Sadly, it took her far quicker than anyone had expected, but right until the end she carried herself with endless humour, dignity and grace. My thoughts are with her family and many friends.

What about you guys? If we were having coffee, what would we talk about?