There are two words that are guaranteed to make any teacher in the UK excitedly poke their head up from their piles of marking: Snow Day.

The weather here is predominantly dull for about nine months of the year. We are susceptible to lots of rain, flooding and occasional storms, but heavy snow is rare in the Midlands, usually appearing for a few days, or at the very most, a week. You’d think that it would make little difference to people’s daily lives, but the beauty of living in the UK during sudden snow storms and blizzards is that we are totally unequipped to deal with them, and so the country comes to a complete standstill. Roads become innacessible, schools and businesses close and thousands of people get the day off work, much to the annoyance of the parents of our students – many who see us as being glorified babysitters. My school has an efficient heirarchical system in which phone calls are made when closures happen to ensure that staff are notified that they can put their jammies back on and go back to bed. My friend and I have a ritual when we get ‘the call’ – one of us will send the other simple text message: ‘Pub. 11.00am. Lunch’ and we have done this on every snow day we have had for the last ten years.

Therefore, you can imagine the excitement that appeared when the weather report predicted the sudden arrival of six inches of snow. The report happened on Sunday, with the weatherman eagerly explaining that the snowfall was expected at 7.00pm on Tuesday night and was supposed to  continue until Wednesday evening, and consequently for the last few days I have heard many discussions about potential plans for the day and ‘snow dances’ that need to be done in advance. 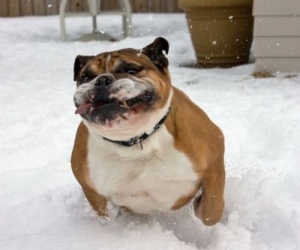 Tuesday arrived and I was constantly looking up at the sky. There were clouds, it was certainly cold enough… It was looking good! At 6.00pm it happened – I looked out of the window and big flakes of snow were falling and the car already had a nice little snowy blanket on the roof. I did my happy dance around the living room (to which The Bloke rolled his eyes) and then carried on with the rest of my evening.

Nothing. Zilch. Nowt. Not a speck of snow anywhere. Instead, it was dark and raining heavily.

What about you guys? Have you been let down by the weather?

93 thoughts on “Duped By the Weatherman”