In the world of ice-cream, my friend is definitely Rocky Road with extra sauce and sprinkles. She’s striking. When she walks into a room, people don’t just notice, they stop what they are doing to stare, and some will even get up and walk over in an effort to speak to her.

The thing is, there isn’t anything specific about my friend that makes her stand out. She’s pretty, but couldn’t anywhere near be classed as model quality, she doesn’t go overboard with her clothes and make-up, she’s intelligent, but not a genius, she’s classy and well-spoken. She possesses that ‘something’ – that special X Factor quality that separates her from the pack. Even more frustratingly, she’s genuinely a very nice person and has no idea about the power that she holds. Her life, to me, seems exciting – she likes to travel and experience new things and isn’t scared of taking risks. She’s a natural leader without being bossy or rude.

I have always been, and always will be, vanilla. This isn’t said in an attempt to hunt for false compliments, it is simply fact – at the age of 33 I have had plenty of time to realise my own strengths and weaknesses. In a group of people I have never been the one to stand out from the crowd – I am that person that merges into the background, the one that blends in. I am not the risk taker – I’ve always been more of a follower than a leader. 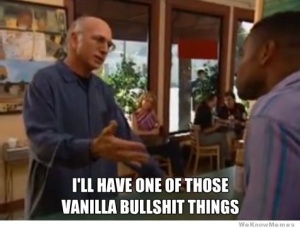 Vanilla is used as a derogatory term to describe someone, or their lifestyle as unexciting and conventional. Boring. I used to feel that being thought of as vanilla was a negative thing. Indeed, I used to feel a little short-changed when I was offered ice-cream and then handed vanilla. However, vanilla surprised me. I discovered that:

As I have aged, I have grown to like being vanilla. It may be a standard flavour, a basic flavour, but to me it is a dependable one that doesn’t change, and yet can be incredibly versatile at the same time in that it compliments the flavours around it. Vanilla doesn’t pretend to be anything else, it is what it is. I like my life and it’s vanilla existence.

And besides, this means that us vanilla girls get to add a cheeky topping occasionally!

What about you? What flavour of ice-cream are you?

You can also find me on Twitter and Tumblr @suzie81blog and don’t forget to visit my Facebook page http://www.facebook.com/suzie81speaks

75 thoughts on “On Being Vanilla”