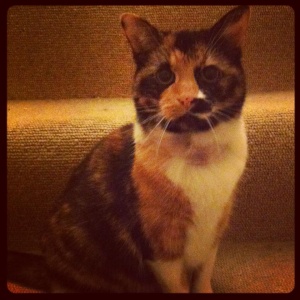 Is been a year since I lost my little friend.

For some, owning a pet is the same as buying an object, or a piece of furniture. For me, our pets become part of the family – needing the same love and care that we would give to any human being. While many may roll their eyes at the sentiment, she was my companion for thirteen years. I had adopted her from an RSPCA shelter when she was six, and by all accounts hadn’t had the easiest start in life, but I was surprised by how quickly she settled into a comfortable life with me. When so many things changed, she remained my constant through the good and bad. She was a little character, she made me laugh and crappy days at work would seem far less crappy after I had been greeted by her at the door as I arrived home. I bought her the best food I could afford, toys to play with, I had many sleepless nights when she was sick. She would regularly assist me when marking my students coursework by choosing the paper I was working on to sit on. I would wake up at 5.00am to find a fluffy paw tapping my face, indicating that she wanted breakfast, which she would then promptly ignore after her bowl had been filled. I took as many pictures of her as my friends did of their newborn babies. We were a little team, with my friends and family often enquiring after her before they asked anything about me.

A year ago she left me – at the grand old age of nineteen – and saying goodbye was one of the most painful things I have ever had to do. I know that she was ill and she had a good life with me, but there isn’t a day that goes by that I don’t think about her and miss her very much. I miss the 5.00am wake up calls. I miss marking coursework without having to remove her from my papers first. I miss the little squeak I would get from her when she realised I was home. Of course, I still have the other two little monsters,  but there is, and always will be, an empty space that she left behind.

I’m grateful for the years I had with her. I just wish they hadn’t gone so quickly.

Miss you, my little friend…

91 thoughts on “One Year On and I Still Miss Her”