And so it was that I found myself walking into the entrance of The British Library, ready to meet a group of bloggers for the Annual Bloggers Bash, which had been organised by the lovely Sacha Black and her committee – Hugh, Geoff and Ali. I had said goodbye to The Bloke, nervously smoked a cigarette and navigated my way through the hoardes of people on their way to Kings Cross Station. I had been looking forward to it, but inevitably had been anxious all morning, and the fact that I left it a bit late to get ready, had to redo my make up after poking myself in the eye with my mascara (although, I remembered to do both eyes this time) and spent twenty minutes curling my hair only for it to all promptly fall flat half an hour later due to the heat didn’t particularly help.

However, when I got there I realised that I had been worrying about nothing. I was greeted with a massive hug from Hugh, who was easy to spot wearing his Bloggers Bash t shirt and a huge smile (oh, and trousers – I realise my description made it seem like that was the only thing he had on) and after some introductions I settled into conversations with people that I have followed and talked to online for a long time.

Here are my highlights: 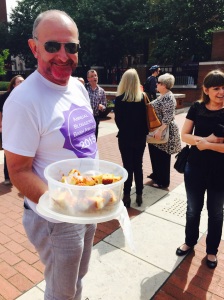 Geoff, who will be forever known as ‘Geoffle’ sporting a bright pink beard and producing cake. Life is always better with cake, and his cake was awesome.

Talking. So much talking. Everyone was talking to everyone else. People had travelled from all over the UK, and Ali had come from Ireland, and Connie from Germany. Within half an hour I’d had a chat with Graeme, Helen, Elissa, Hugh and Mel, and the atmosphere was lovely.

Listening to Helen’s accent. She’s lived all over the world, and although she currently resides in the UK, she has developed a Canadian/Australian/English accent and I found it fascinating just listening to her talk. And she’s as lovely in person as she is online too.

Sacha’s speech. She had put so much of her time, and indeed, herself, into the planning and organisation of the event, it clearly meant a lot to her, and I was pleased for her that it was such a success. 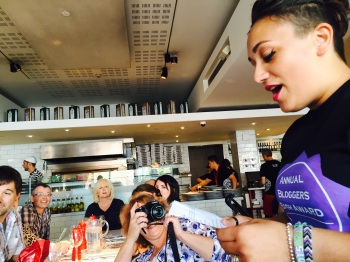 Talking to Helen and Mel about their novels. It takes a lot of guts to be able to do something like that, certainly more than I have, and it was really interesting to find out how they went about it. 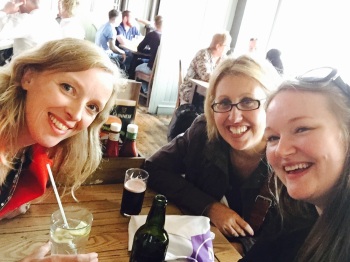 Helen, Mel and me in the pub afterwards…

Giving a tutorial to Lucy from Blonde Write More on how to communicate with her daughters, which I’ve developed after working with teenagers in inner-city Birmingham for the last ten years. For those of you who are interested, it generally involves moving your hands around a lot while proclaiming something as ‘sick’ if it’s good, while talking through your nose. I’m looking forward to finding out how her daughters responded.

Hugh giving his speech… No idea whats going on with my face here.

Hugh. Just Hugh. As every bit a gentleman in person as he is online, he was warm, funny and a genuinely lovely bloke. And he gives great hugs. I also found it incredibly sweet how nervous he was when he was reading his speech out for the awards.

Receiving some unbelievably flattering compliments from Dylan about the blog. I didn’t quite know what to say at the time as he caught me completely off guard, but thank you Dylan, you absolutely made my day. I wished I had more of an opportunity to talk to him, but we always seemed to end up on opposite parts of the room.

Talking to Sue about her very inspiring son. I had read her amazing post about him last week, and the way that her face lit up with her obvious pride in his achievements was a brilliant thing to see. Incidentally, for those of you that would like to add to hundreds of pounds that he has already raised, click on this link here…

The staff at Pizza Express who joined in our applause and celebrations, and the waiter who was obviously trying to keep calm while blatantly wanting to punch us all in the face for paying our bill separately. 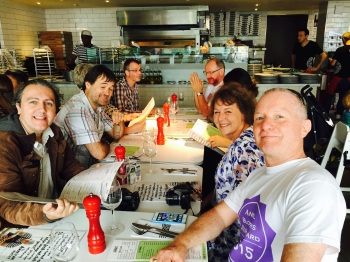 And finally, the awards. Yes, I was absolutely gobsmacked when I was given not just one, but two awards – the ‘Inspirational Blogger’ and ‘Services to Blogging.’ After I had stopped shaking, I was asked to give a speech, and my mind went totally blank. Despite being able to make a fool of myself in front of teenagers on a daily basis without any concerns, having to talk in front of adults, particularly articulate and intelligent adults is a completely different thing, and I awkwardly said ‘thank you’ and sat down.

Thank you for nominating me Hugh and Lisa, and thanks to everyone who voted. I’m honoured and still a little bit overwhelmed by the whole experience. What started as a way to express the thoughts that were swimming around my brain during what was a very difficult time, has now developed into something that has introduced me to a wonderful community of supportive and creative people, and I’m not being melodramatic when I say that it has changed my life. Thank you Sacha, Hugh, Geoffle and Ali for organising such a wonderful event.

I’m a bit gutted I didn’t get the opportunity to talk to more people, but I can see that everyone had a brilliant time.