This weekend, I went up north to visit my mother, and she suggested that we have a day trip out to the coast and visit Blackpool.

Ah, Blackpool. The Las Vegas of the North, that is, it would be if you replaced the glitzy Vegas casinos with crap B&B’s and amusement arcades. I’ve always had a love/hate relationship with the place. As a child, we visited often to see the illuminations, and over the years I’ve attended various hen parties and performed in the pit at Grand Opera House for different shows.

The Tower and the Comedy Mat

For me, Blackpool Pier is the Sharknado of all tourist destinations. It’s so awful that it’s fantastic, and every stereotype of the North can be found at every turn. The ultimate place for a cheap and raucous hen/stag party, the pier is littered with large groups of drunken people in varying degrees of fancy dress and thousands of screaming children being shouted at by angry mothers. There’s a permanent smell of cooking oil, chips and doughnuts in the air, and you can’t walk more than ten paces without seeing an arcade, a tribute act or a place to buy a crap penis shaped present with ‘Blackpool’ written on it as a souvenir. The buildings are old and decaying, and even better, the town’s water system has been infected by a dangerous form of bacteria, so we had to ensure that we were careful and bought bottles of water from a supermarket beforehand.

It was one of the best days out I’ve had in ages.

My mum and I had a competition to see who could spot the iconic tower first. I won, with my prize being the 20p my sisters and I were given when we were children. I tried to reason with her that, with inflation, it should have been more like £20.00, but she wasn’t having any of it. 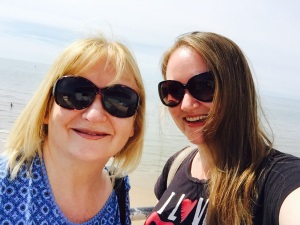 Selfies at the end of the pier

The weather was absolutely gorgeous, and as soon as we got to the seafront we relaxed and took in the views of the beach. We walked along the pier for hours, spent ages looking through the large Comedy Mat on the floor, won games and wasted lots of money in the arcades and then treated ourselves to a meal at a restaurant on the way back. Steve from Steve Says had set me a challenge to find the tackiest present possible, and I found this the ultimate pink pen with a picture of the Tower on it. Fabulous.

It was absolutely packed – it seemed that most of the North had had the same idea as us – but I didn’t mind. It was nice to see lots of families spending time together and joking around, taking pictures of their children on different rides and getting ice-cream on their faces. 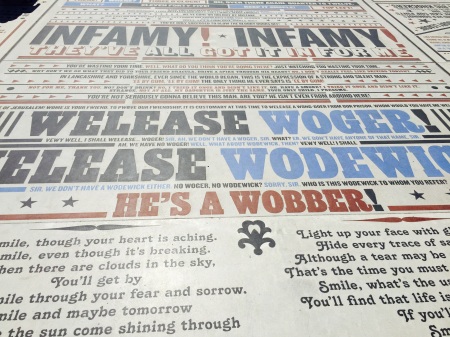 Some of my favourite comedy quotes 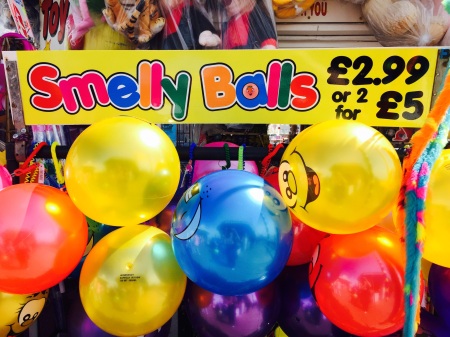 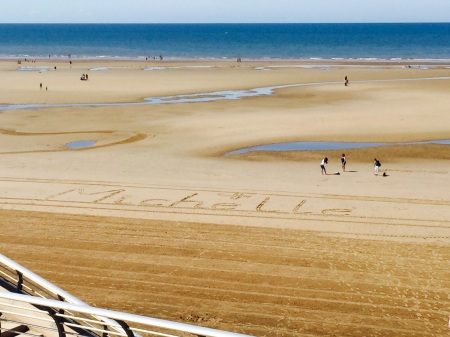 People like to write their names in the sand…

The thing about Blackpool is that it’s crap, it knows it, and it doesn’t pretend to be anything else. I love the atmosphere every time I go, and most of all I love the people. When I visit London, the residents will quite happily barge others out of the way without a second glance. In Blackpool, you’ll get an apology, a friendly joke and a ‘have a good day.’ People will have a friendly chat with complete strangers, and it’s one of the best qualities of northerners. We are what we are, there are no airs and graces. What you see is what you get.

And Blackpool is exactly that: what you see is what you get.

What about you guys? Are there any places you visit that are just so bad they become amazing?

26 thoughts on “A Day Trip to Blackpool”