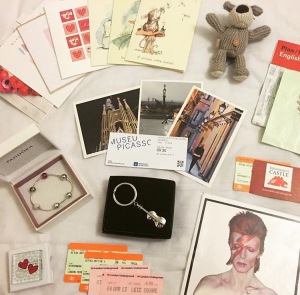 I think that one of my first ever posts focused on the amount of things that I have collected over the years. I’m the last person that could ever be considered to be houseproud, but while I’m by no means a hoarder in the typical sense, I have noticed that this collection is growing steadily larger as time goes by.

I spent some time this morning trying to get some sort of idea of what things I actually have – it’s been two years since my last major declutter, which was when we last moved house, but I had no idea of just how much that I’ve added to the pile since then. My attempt to tidy up has resulted in me trashing large areas of the house – The Bloke will be delighted when he gets home I’m sure!

The thing is, they’re mainly small items that I keep for their sentimental value and the memories that they evoke, particularly when it comes to places I have visited. Tickets, objects, cards, keyrings – I have box after box of things that are just, well, in a box. It seems completely pointless to keep them, and yet I can’t bring myself to throw them away. I’ve kept every birthday and Christmas card I’ve ever received from my mother since I was about ten years old, every card that The Bloke has ever given me, all the letters I was sent when my oldest friend and I went off to different universities, postcards, maps… I have a set of tiny ceramic clogs from Amsterdam, a dreidel from the Holocaust Museum (one of the most moving experiences of my life) and a token from one of the Smithsonian Museums in Washington D.C. , a Little Brown Bag from Macy’s in New York, a tiny Eiffel Tower, a map of The Louvre and a napkin from Laduree in Paris, a decorated wine glass that my mother gave me on my 30th birthday. I have show tickets and programmes, certificates, tube tickets, even children’s books that I have repurchased after they were sold at a car boot sale when I was a teenager.

I did make an attempt to organise things a while ago, and I have half-finished scrapbooks and notebooks that I started adding things into and then got bored.

Now I have a holiday, I think that it is about time that I started to do what I set out to initially do nearly three years ago – now that I have almost succeeded in decluttering my mind, I should probably declutter my physical surroundings too… And it gives me an excuse to get myself on Pinterest too – not that an excuse is needed!

Do you have any hints and tips? Could you point me in the direction of some good crafty ideas? I’d love it if you could send me some pins that I might enjoy! http://www.pinterest.com/suzie81speaks

53 thoughts on “Organising the Memories”