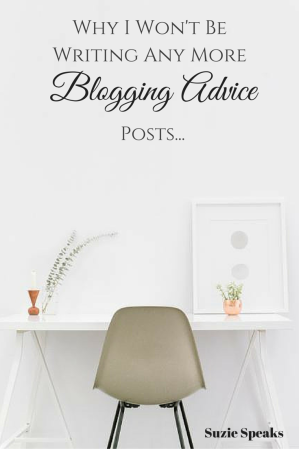 Yesterday, during #SundayBlogShare, a single tweet got my attention. It was a simple statement without a link – I can’t find the actual tweet now but it went something like this:

In the last twelve months or so, I’ve seen a huge increase in this type of content. Indeed, Pinterest and Twitter in particular are littered with them. There are entire blogs who are devoted to the complicated and time-consuming art of blogging. It’s the one type of post that any blogger can do, and fits with any niche or theme.

I’ve done a number of posts myself that I refer to as ‘Blog Advice’ – hints, tips and guidelines on everything from increasing traffic, understanding the insignificance of how many times a WordPress post is liked, replying to comments, and using hashtags and group boards to build a following and community – and I have based these on my own experiences of what has worked for me. At the time, it always feels like these sorts of posts always get more traffic than any other – there’s usually an immediate and positive response that is accompanied by a number of social media shares and comments.

However, upon closer inspection, they aren’t as successful as they initially appear. Indeed, within my ten most successful posts of all time, there isn’t a single blog advice post – my most popular posts are ones where I have shared a personal story or thoughts on teaching (and quitting it), relationships, pets and emotional intelligence. There aren’t even any in the top fifteen. It isn’t that I have done any less promotion on them than any other post, but it seems clear that, while they may be useful at the time, my readers aren’t as inclined to share or revisit them – once they’ve read it, they have the information they may feel that they need and don’t return to it again. Or, potentially it could mean that they thought it was complete nonsense, and were too polite to say anything…

Here’s a few thoughts on advice posts and why they may actually be detrimental to your readership:

At what point do we deem a blog successful enough to take their word as absolute? I started writing advice posts after I had received about 40,000 views, and my knowledge then was minimal compared to what I know now. Indeed, I see many bloggers who have only just joined the community, and seasoned bloggers with an enormous following writing posts on hints and tips. Who is to say which one is more valid? Would you follow the opinions on a post that is beautifully written, or base it on the numbers – they don’t necessarily go hand-in-hand.

There’s no right or wrong way to blog (that’s one of the many reasons why I love it).

Advice posts can be seen as negative, ie. you’re failing if you aren’t doing a particular thing, and sometimes they make others feel intimidated or disheartened, even by the titles alone, and I’ve read a number of posts recently that tell me as such.

They have started to fall into the category of writing just for a blogging audience. However, a readership does not solely consist of bloggers – I know a number of family members, friends, former colleagues and members of the public that read my ramblings regularly, and advice posts could potentially alienate those who don’t have an interest in blogging.

Not all of these posts are truly authentic in the advice that is given – a blogger will tell you to reply to comments (which, admittedly is a great way to build a community) but won’t share the fact that they paid £50 to Facebook to advertise a post, or the fact that they follow blogs to encourage a follow back, only to unfollow later on. I tried the Facebook thing once – I paid £13 and received nine extra views… total waste of money.

Of course, some posts are incredibly useful (and I’ve found some level of success myself after reading them and following their instructions) but unless somebody says ‘here’s a button that you can press to make your post go viral’ there is nothing new to say that hasn’t already been said a thousand times before, in a thousand different ways. It’s even got to the point where enormously successful posts are being stolen and passed off as their own work by other bloggers (unfortunately I’ve witnessed this on several occasions recently), purely because many people have run out of ideas. Sad, but true.

So, for the time being at least, or unless I find a new and effective way to increase my stats that nobody has used before, I won’t be writing any new advice posts. There’s nothing else I can say without the risk of repeating myself. That doesn’t mean I won’t be sharing my older ones in the way I always have, or reading and sharing those of others, and I am going to revamp the ‘Blogging Advice’ section in my menu where I can keep all of my advice posts on one area, but I’m going to return to what I originally started the blog for all those years ago: to share my life, my thoughts and my personal experiences with a community that has been an invaluable source of support.

What about you guys? Do you find advice posts useful? Do you write your own advice posts?