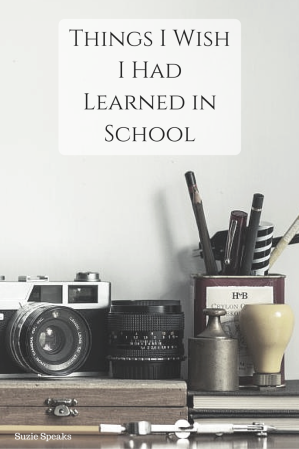 A while ago, I created a list all the useless things that I learned during my school years. This prompted a number of conversations with friends about what we felt we should actually have learned all those years ago that would be relevant to our present lives. Of course, financial insights into mortgages, loans and interest rates were at the top of our lists, but after a while the inevitable silliness took over. Here are some of the best:

1. How to work my bedroom blinds. I made the wrong decision at university – instead of a music degree my time would have been better spent learning how to pull my blinds up without them being uneven or falling back down again. They’re the bane of my life.

2. How to stop spending my money on useless crap. Even now, despite attempting to be much more frugal with my earnings, I can still leave the house with £30 in my purse and return with no money, nothing to show for it and no knowledge of how I have spent it.

3. How to fix a photocopier. The photocopier at work is the most complicated piece of machinery I have ever used. It contains so many components and parts I suspect that it was secretly designed by NASA, and it clearly has a grudge against me. I could be watching it for several minutes while the person before me does 50 copies, but the minute I put my paper in it shuts down and has a tantrum. I follow the instructions carefully to locate where the paper jam is, only to discover that there is no paper anywhere to be seen. I’ve heard of dog and horse whisperers, does this mean there are photocopier whisperers?

4. How to spot a douchebag. Whether it be during a relationship or a friendship, I have always been unable to see the douchebag in someone until it’s too late and have been subjected to the ‘yeah, I though he was a bit of a pr*ck to be fair‘ statement from others when I have been upset.

5. How to lighten up and relax. I am my own worst enemy – I frequently let my anxieties and self-doubts take over whatever I’m doing and it often takes twice as long to get anything completed.

6. Once you hit 30 years old, even looking at a chocolate bar will make your bottom expand. After gaining 60lbs over the last few years I decided to lose weight and assumed it would be easy, something that I haven’t had any trouble doing before. How wrong I was. Exercise makes a difference, but nowhere near as effectively as it used to and I have to work twice as hard to get the same result.

7. How to fairly divide a bill six ways when two have had appetisers, three have had four bottles of wine between them, five have had dessert and one has just had a salad and a lemonade without appearing to be rude or hurting anyone’s feelings. It’s a complicated process, but one of the few instances where I have to admit that maths is useful…

8. How to cook for just two people. As a teenager I often cooked for my family (there were five of us) when my parents were at work and it has meant that I have no concept of portion control – even measuring things out always results in the equivalent of a banquet every time I prepare a meal for The Bloke and I.

9. Sambuca and tequila are evil substances, even in very small quantities. It may seem like common sense, but it took a few occasions to realise this. Never again.

10. How to dance without looking like a frog in a blender. I enjoy dancing and frequently do so when I go out with friends, but photographs and videos the day afterwards always demonstrates the fact that I have no coordination whatsoever – it’s all arms and legs everywhere.

12. Nobody actually knows what is going on. I used to think that some people had their lives figured out – I was envious of their beautiful homes, endless supply of cash and seemingly perfect existence. However, the more I get to know others, the more I realise that nobody really knows exactly what they’re doing and are bumbling their way through life in the same way I do. The only difference between them and I is that they have mastered the art of appearing like they have a clue.

What about you guys? Are there any particular things that you wish you’d have learned in school?

61 thoughts on “Things I Wish I Had Learned in School”