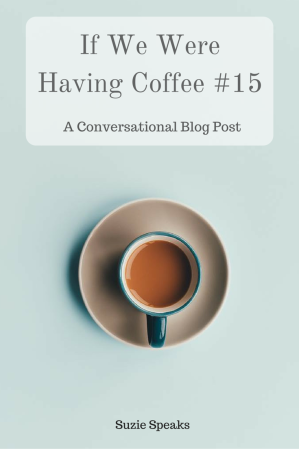 It’s been a busy few days. I seem to be saying that a lot recently, and I couldn’t be more grateful.

If we were having coffee, I would tell you that work has been abundant, to the point where I am able to decide on my own hours and as a result I’ve been able to turn some of it down. I’m still conducting freelance workshops, planning for a big concert with a primary school and doing supply three or four days a week, with the knowledge that at the moment I could do a full five-day week if I wanted. Most supply days are nice and calm, and I’m enjoying spending time with some of my favourite students. For example, today I was covering a Year 10 class, most of whom I have known since they started the school in Year 7. They walked in, smiled and greeted me, picked up their text books, sat down in silence and got on with the work that had been set. Every so often, they would ask me a question if they were confused, and other than an interesting conversation I had with one of them about football as they were packing away, and a ‘bye, enjoy your lunchtime!’ as they left, I didn’t hear a word from them. And I got paid for it. Awesome. However, I’ve been able to take the odd day for myself, during which I’ve done exciting things that I enjoy. Unfortunately, I’ve been full of a stinking cold over the last week, but now my head is a little less fuzzy I can get back to some quality ‘me time,’ and doing so while being able to breathe properly. Yay.

If we were having coffee, I would show you that it looks set to be even more busy over the next month, with a week in Scotland, various launch events for restaurants and bars, and a spa (ooh!), a food festival, beauty blogger event, and of course, the Annual Bloggers Bash in London which I have been looking forward to for months.

If we were having coffee, I would tell you that I have also been spending the last few days with Paddy, my friend’s bunny. I love animals, but this one hates me. He always has – if bunny looks could kill I would have been dead at least thirty times over by now. Yesterday, I decided that I would make a huge effort to try and win him round. He’s a house bunny, and litter trained, so he was in the front room with me. I tried to talk to him, bribe him with grapes and give him a cuddle. He wasn’t impressed, and did this for about two hours: 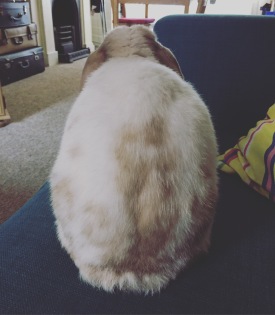 I think perhaps I was a little more into it than he was.

If we were having coffee, I would tell you that I’m also excited at the fact that it’s that time of year again. Yes, it’s Eurovision, and those of you who follow the blog on a regular basis will know just how much I love it. The Bloke and I look forward to it all year, we get the snacky treats in and spend the evening getting involved in the performances. Then, I’ll watch the results part by myself as he will inevitably have fallen asleep, and then we’ll stagger up to bed. It’s become a bit of a tradition. Last year, I also had a little Twitter party with Steve and Hugh, but this year Steve has gone one better and actually got tickets to the live event in Stockholm. I’m hugely jealous, and this year The Bloke and I will be playing the game of ‘Spot the Steve’ during the show.

What about you guys? How has your week been? What would you tell me if we were having coffee?