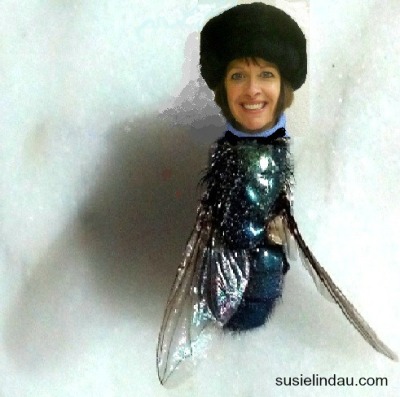 I’m a fly on the wall at Suzie’s place today.

First of all, we have the best names in the world, right? Thanks so much for allowing me to invade your personal space. I am very excited to be here.

When I won Suzie’s guest post opportunity it was as if she handed me a microphone and pointed me in the direction of a podium. I imagined myself on stage, blinded by footlights while the audience remained in shadow. A few coughs would let me know they had come to be entertained, but what the heck would I say up there on my soapbox? I’m more of a casual, sit on the couch and have a conversation, kind of girl. So I’m relaxing on her overstuffed chintz sofa today.

By the way, Suzie has very nice digs. Roomy, great views, stocked fridge… I might stick around for a while. Ah! She left me a pot of tea. I’ll add some ice and lemonade and make myself a very American, Arnold Palmer. Oh! Shortbread cookies. Yum.

This is my blogoversary week. I started Susie Lindau’s Wild Ride in May of 2011 having no idea how wild it would get. Yep. It’s been really wild. I’m an adventure girl, live in Colorado and always look for an opportunity to do something different. Skiing, hiking, biking, dancing… but I had no idea I’d become a survivor too. Don’t worry. I’m very healthy now.

I’ve been in flash fiction groups, hosted lots of wild blog parties, and have made tons of blogging friends. To me, blogging is modern day pen-palling. I’ve met many of them in real life and hope to meet many more. Like you and you and…oh, don’t worry. I won’t just show up on your doorstep. Unless you want me to…

This morning, I looked back on a post I wrote about Karma and how she made me believe. Ha! Did she ever. My husband refilled the humidifier one night and smacked himself in the eye with the arm of a rocking chair. The next day he woke up with the classic black eye. I laughed so hard! KO’d by a chair. Days later, she got me back. Anyway, I looked at the “likes” on that post. Most of those bloggers have quit. It happens all the time. I could never give up this community. To me that would be like saying, “I can’t be your friend anymore. It’s too much for me.” Besides, sitting on couch spewing all the crazy stuff that happens to me is way too much fun.

You see, I have no shame.

I started Susie Lindau’s Wild Ride to practice writing for books and to build “my platform” even though I didn’t know what that was at the time. (Psst. It’s the number of people who follow you through your blog, social media, lectures, etc.) I wrote a proposal for a non-fiction book and had a couple of chapters all ready to go. The idea was a snarky take on Boulder women. My friends thought it was super funny, but they worried I wouldn’t be able to go out in public ever again. I felt uncomfortable being the kid pointing out that the Emperor was naked. And who was I to point anyway. I never sent it to anyone.

Then later that summer of 2011, I chose a longish fiction that was about 800 words and decided to blow it up. Now it’s a 380-page book. Sounds fast doesn’t it? That first draft took me almost two years. C’mon. Writing a book is nothing like writing blog posts. There’s tension, stakes, conflict, plot points, character arcs, POV…to name a few techniques I had to learn, and I was still trying to figure out what the heck a writer’s platform was.

I couldn’t keep up my Friday flash fiction and write a book. There were too many people in my head. Funny thing. I wrote the second book in the series during NaNoWriMo. It took three weeks. I’m getting a little faster.

Oh, yeah. I come from an art/illustration background. I drew this for that NaNoWriMo post, but I have arguments in my head all the time. 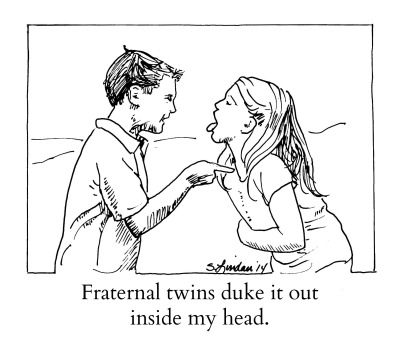 I’m querying my debut novel right now, so send me some positive energy. Hey. I’ve lived in Boulder for while now. I believe in that stuff.

For five years I’ve been practicing, reading and learning. I couldn’t do that in a vacuum. I need the feedback. I LOVE the feedback. I am addicted to the feedback. I’m all about comments. If I get the sound of crickets, I pay attention. Then I rethink what I wrote about, make a mental note and move on.

So who are you and what do you write about? I would love to meet you in Suzie’s comments.

And don’t forget to stop by the Wild Ride where you can check out the view of the Rocky Mountains. I’m looking at them right now. The peaks are still snowcapped. I can’t promise you tea and shortbread, but I’ve got a comfy couch with your name on it and the coffee is always hot. Hope to see you soon!

You can find Susie by clicking on her blog here. Totally worth it…