The Bloggers Bash. I’d been organised for months. The Bloke and I decided to turn the event into a long weekend away, so we arrived the day before and had a ‘Bloke and Suzie’s Day of Exploring London.’ Consequently, on Saturday morning I was knackered, but a combination of nerves and excitement meant that I had been awake for hours. The Bloke went off with his camera for the day and despite the fact I had already worked out my make-up and hair look, by the time Steve (Steve Says) arrived at the hotel to meet me for brunch I still wasn’t ready. And, I realised, I was wearing the exact same outfit as the year before.

Me and Steve, after i had managed to sort out my hair and make-up…

Dammit. It’s a good job that my readers don’t rely on me for fashion advice…

My hotel was only a short walk away from the venue, so we arrived a little early and promptly stood outside as it appeared to be locked. Eventually, I rang Sacha, who told us to come on up, and it was only then that we realised that neither of us has actually bothered to try the door.

We were greeted by an already large group of people, full of hugs (I got the Huge Hugh Hug – try saying that after a couple of pints – that I had been promised), offers of cake (baked by the lovely Geoffle, who was sporting a rather fetching bright purple beard), and Ali (who had flown in from Ireland) registered us, gave us our name badges and pointed us in the direction of the bar. Perfect.

And what an awesome afternoon it was. I got the chance to catch up with people I met last year and I was introduced to many new ones in person that I have been talking to in the blogosphere for a while. With so many people involved, an explanation about every part of it would turn into an epic 5,000 word post, so here are just some of my highlights:

A really interesting and amusing talk from Luca, an Automatic employee, who gave me a few things to think about when sharing my blog posts and those of others in the future. 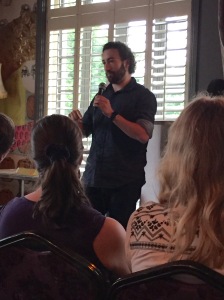 Making people take pictures with me. When I say ‘making,’ it was just that – I generally walked around with my phone and shoved it in their faces before they could object. I particularly like the gorgeous duck face that Helen produced. 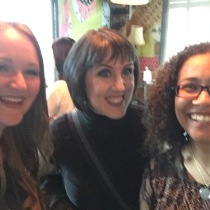 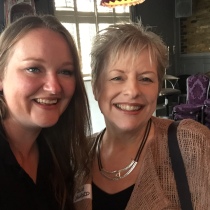 Being naughty and sneaking upstairs into a room with Steve so he could have his picture taken in a waltzer chair thingy. He’s a bad influence, that one…

Chatting with Barb Taub and realising that she was American – I hadn’t a clue, despite the fact that I have read a ton of her posts.

Luca attempting to take some professional photos of Sacha, Lucy and I afterwards – let’s just say that Charlie’s Angels aren’t going to be worried about the competition anytime soon…

Being inspired by Juile’s epic weight loss, and grateful that she had brought a handheld fan with her! (It was so hot that I thought my face was going to melt).

Hugh, Sacha and me 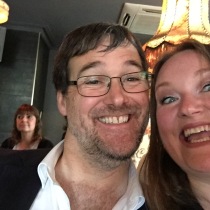 The look of sheer delight on Shelley’s face at winning the Most Inspirational Blogger award (incidentally, after only getting the chance to talk to her for just a little while, I have come to the conclusion that she is perhaps the most smiley person I have ever met – I’m considering asking her if I can become her manager so I can introduce her to some of the more miserable people I know… Five minutes with Shelley and the world seems a happier place!)

Lucy’s rather admirable attempts to remain calm and poised upon winning the Funniest Blogger award, when really I know that all she wanted to do was this:

Talking to Cynthia and then scaring her later at a crossing after the event – we left at similar times and when I caught up with her and said hello I was stood right behind, so I scared the crap out of her. I found it funny, although it was probably not as amusing for her as it was for me…

And finally, winning the Best Overall Blog! My category was left until last, and Sacha’s attempts to build some sort of tension worked – by the time it got to the announcements I was an absolute wreck and my heart was beating out of my chest. I then had to go up to the roof garden and with my hands still shaking I rang The Bloke and my mum, and then spent a little time trying not to vomit everywhere.

Congrats to all the nominees, the runners-up and the winners, and a truly huge thank you to everyone who voted for me, and to the Bloggers Bash committee for the monumental time and effort they put into the organisation of the event. You can check out all of the winners here…

Looking forward to the third Annual Bloggers Bash in 2017!