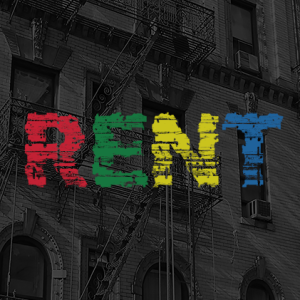 I’ve been a huge fan of the music from RENT since my teens, yet have never seen the musical live, so I was ecstatic to receive an invitation for the opening night of RENT at The Old Rep Theatre in Birmingham.

Directed and choreographed by Michael Neri, with a stellar cast of up-and-coming local talented performers, RENT tells the story of a group of young adults who are struggling to survive in New York’s East Village, dealing with issues of AIDS, drug addiction, homosexuality and homophobia.

The set is cleverly simple, with effective ideas used for projections and lighting to suit the small stage in the theatre, and we were given a lovely welcome by the staff when we arrived.

The cast were incredible, with each giving wonderful individual performances in their own right. In particular, Jessica Singer (Mimi) and Joe Ashman (Mark) commanded the stage throughout and Rhys Owen’s performance of I’ll Cover You (Reprise) in the second half was so inspiring that the audience were compelled to give a standing ovation before the song had even finished. Seasons of Love, the opening of Act 2 (and the song I’d been most looking forward to) also didn’t disappoint, with the harmonies on point and a brilliant top note from Alys Wood. 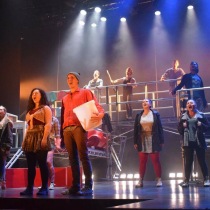 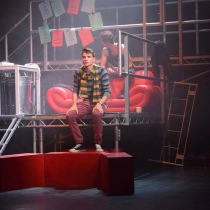 Unfortunately, there were quite obvious issues with sound, meaning that dialogue was frequently lost throughout most of the first half, and there was an imbalance at times between the band and vocalists, resulting in some of the songs almost being drowned out. I particularly felt for Sophie Poulton (Joanne), whose mic was consistently temperamental, which was a shame because when we did get to hear her voice it was stunning! There were also several prop and costume malfunctions (opening night inevitability), but the professionalism (and improvisational skills) of the cast meant that this did not detract from their passion and performances.

RENT is currently at The Old Rep Theatre in Birmingham until 30th July, with tickets priced at £24.00 plus booking fee.

4 thoughts on “RENT at The Old Rep”