After enviously seeing some of my neighbours Christmas decorations over the last few days, I took the opportunity this morning to finally decorate the tree and front room.

We’ve had the same tree for years – a cheap and artificial Argos purchase – and it’s been with us through three house moves. The decorations initially started off as one silver bauble set, lights and some tinsel that we bought with the tree, but every year we have added to it with things we have purchased on our travels, resulting in a mishmash of glass stars, little pottery santas, Beatrix potter characters, wooden snowflakes and gingerbread figures. People with design ideals and OCD would have a minor panic attack.

I have a little joke every year that the tree looks a bit drunk, but after my decorating attempts today it was positively sozzled – the tinsel was falling off, the decorations were bunched together in one area and the lights could barely be seen. Cue another hour of redecorating, during which my cat had a great time attempting to knock the baubles off the bottom branches.

Yup, I was bored by this point. It’s not like that in the movies, with smiling families setting up a nine foot spruce and beautifully matched decorations by candlelight – and yet here I was, trying to stop a maniacal kitty from running off with a Christmas Mrs Tiggywinkle while Jeremy Kyle shouted at his guests in the background on the TV.

However, when I sobered the tree up a little it actually looked OK, so I moved onto phase two of my annual Christmas shenanigans: a cat in a hat.

It’s become a tradition every year where I bring out the kitty-sized hats to get them into the festive spirit. Last year, I had two cats, but as one passed away a month ago I’m left with just one – my boy – who had a brilliant time when I tried on his woolly bobble hat and santa hat. See for yourself! 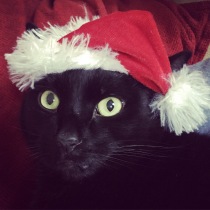 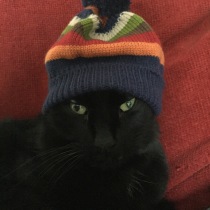 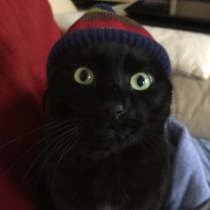 So, when The Bloke came home after work, he was greeted with a Christmas soundtrack, a tipsy tree and a cat in a santa hat…

It’s what Christmas dreams are made of!

What about you guys? Have you started your decorating yet?