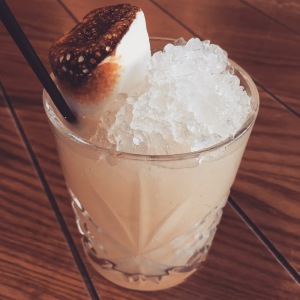 It’s been a busy few weeks. With a mixture of supply, invigilating GCSE examinations, freelance music, social media management and time spent with family and friends, every day has been different. I went to visit Squidge a little while ago, who is now nearly five months old and stayed with each family member so I had a chance to catch up with everyone, continued with my wedding planning, I have met up with friends for lunch and at the weekend I crashed an 18 year old’s birthday party, which at 35 years old felt a little silly, but it turned out to be a fantastic night.

Attending parties without an official invitation isn’t something I normally do, and initially it started out as a bit of a joke. I was a classroom music teacher for ten years and my favourite ever class consisted of a group of amazing, smart and lovely students who I loved working with each week. I taught them for several years and watched them grow into talented and conscientious young adults and I have remained in contact with some of them, even those who left to continue their studies at other places. I discovered that one of them was turning 18 and was having a party. I’ve seen him a few times since he left, including a wedding that we both attended last year (where we spent most of the night dancing away). So, one of his friends was talking about the party and suggested that I should go because lots of the students would be getting together there for the first time in two years, and they and the birthday boy would love to see me. I wasn’t sure at first, but as time went on I thought about it and decided that I would, and so asked the birthday boy’s mother, who I know, if she would mind if I turned up and surprised him, which she thought was a great idea. Phew.

There is a reason behind it. What they didn’t know at the time was that when I was working with them I was struggling in my professional life – I couldn’t cope with the demands of the job – but seeing those students got me through some difficult times. Just being in their company and being inspired by their positivity, their fabulous sense of humour and willingness to learn helped me overcome some incredibly challenging days.

This was my way of saying thank you to them all, and I’m glad that I did. Nobody was aware that I was going, so I nervously walked into the venue to be greeted by a bunch of squeals from them all, and a massive hug from the birthday boy. It was amusing to see them trying to figure out how they should address me – some of them were clearly uncomfortable at first by calling me by my first name, but after a few hours of chatting and dancing they had relaxed and I found myself singing a song from ‘Fame’ on the microphone (there was karaoke) as this was the production we had done while they were at school and a large amount of them were in the performance. At the end of the night I dropped some of them off in a taxi to make sure that they got home safe… I suppose that there will always be a part of me that feels responsible for them, even though they are all legally adults. It isn’t something that I will be making a habit of, but it was a great night. 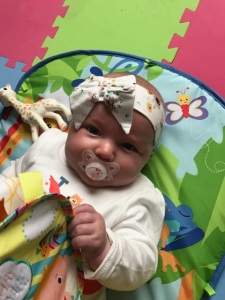 Squidge is adorable. She’s at that awkward phase where her hair hasn’t quite established itself so she is currently adopting her Grant Mitchell from Eastenders look, but she has enormous blue eyes and it’s always amazing to see how much she has changed every time I visit. I think she was a little confused – my sister (her mother) and I look very similar, so she had long periods of just staring at me as if she was trying to work out who I was, and then she’d give me a little smile and my cold dead heart melted. We had some bonding time – I put on He-Man (my favourite cartoon as a child) and she lay on her playmat watching with interest, took pictures on Snapchat with her, I played Journey’s ‘Don’t Stop Believing’ to her as I have done every time I have seen her (I’m determined that she will know every word) and we had a discussion about what a gorgeous girl she is.

She thought about it, or perhaps that she was thinking about the ridiculously oversized sun hat that my sister had put on her… 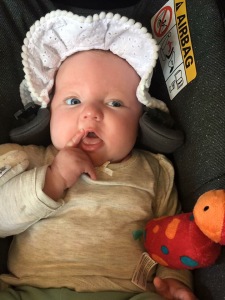 It was awesome – we met up for lunch the following day and I held her to give my sister a rare chance to eat her food, and she was as good as gold – she sat on my knee and stared around the room at everything that was going on, taking it all in her stride. She’s clearly going to be a legend…

Invigilating exams has been both the easiest job I’ve ever had. I can’t complain – aside from the initial set-up I’m stood there doing NOTHING and getting paid for it. I’m not allowed to communicate at all and I can’t sit down – I’m stood in silence watching the students to make sure that they don’t cheat. It’s a for the feet, particularly but it’s been a brilliant way to reflect on recent events. While the thousands were stood in the centre of Manchester singing ‘Don’t Look Back in Anger,’ I held my own personal remembrance during my invigilating. In fact, it was several days of reflection – my life my goals, all the things that I am thankful for. It’s been inspiring to see all of the love and acts of kindness from so many, and I’m incredibly lucky that I am surrounded by family and friends with so much for us all to look forward to.

Oh, and my mum sent me this – she works at Manchester Children’s Hospital where some of the victims were taken after the bombing, and the Queen turned up for an impromptu visit to pay her respects… 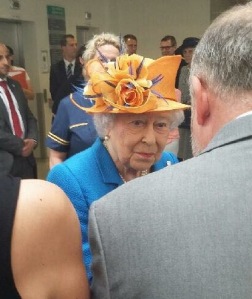 28 thoughts on “A Party, a Squidge and a Time for Reflection”