I always love a good wedding, but when the bride is an old friend it makes it particularly special. For the last year our conversation and activities have been wedding oriented. We’ve looked through Pinterest and magazines, discussed endless ideas over cocktails and I went on her hen do last month. 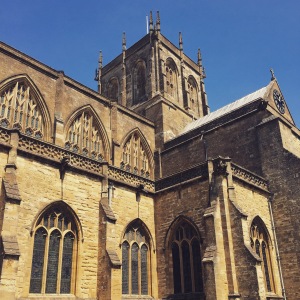 She got engaged a few months before I did last year and at the time it felt like an age before the Big Day would arrive. However, after what seemed like five minutes since she first showed me her engagement ring, The Bloke and I found ourselves stood in our wedding finery in Sherborne Abbey (a 1300 year-old church which was built in 705AD). It was a blisteringly hot day and and we had navigated our way through the tiny streets of the town, arrived at the Abbey early and took the opportunity to take lots of photographs before everyone else got there. The groom and the groomsmen arrived shortly after us, all looking handsome in their blue suits. The groom took it all in his stride – he’s naturally quite a calm and collected person – it was only a few minutes before the bride arrived that he showed flashes of nerves.

I watched my friend walk down the aisle in a stunning dress with her beautiful little bridesmaids and gorgeous maid of honour, accompanied by Handel’s ‘Arrival of the Queen of Sheba’ on the organ. I was so fixated on the bride that I forgot to do what I normally do, which is look at the groom’s face when he sees her for the first time. Gutted. However, it was a lovely service – the Reverend Canon Eric Woods had a great sense of humour and he obviously liked the couple, presenting them with a painting of the Abbey and the date of their marriage that had been done by the iconographer for the church (known as ‘Icon John’) on a small piece of stone that had fallen from the building. Along with the hymns and a beautiful poem, there was a local community choir who performed various songs throughout, which was a nice addition. 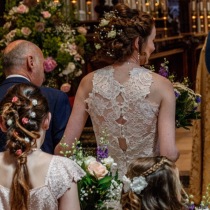 We then travelled to the reception which was held at Northover Manor in Somerset (and at which The Bloke and I had a room for the night), and while the guests were mingling and taking pictures we took the opportunity to check in and leave our bags. It’s a little unorthodox, but I also changed out of my dress and into slim leg smart jeans – the dress and tights were so tight and uncomfortable that I couldn’t bear to stay in it for any longer. Still, I knew a number of the guests already from various nights out and the hen do, so I wasn’t worried about judgement – they’re all lovely people and most of them had seen me after a number of drinks anyway!

It couldn’t have been more perfect. With glorious sunshine, glasses of Pimms, good company and a beautifully decorated reception room, the happy couple and their guests sat down to a lovely three-course meal of baked cheese, duck and a trio of desserts (the best wedding food that I have ever had), and then listened to the speeches, during which 60 of the guests had placed bets on how long they would last. At 58 minutes (I was way off with my prediction of 39 minutes), they certainly reached epic proportions and included a cuddly toy pigeon, a flute, stories of a 32 year friendship and a few tears dotted throughout. My favourite moment of the afternoon was when the Maid of Honour’s husband (who used to be in a band) played and sang McFly’s ‘Love is Easy’ for their first dance and he did an awesome job as the couple moved around the floor – it was a really personal touch.

The whole event was immaculately put together and I noticed different things throughout the afternoon. There was a ‘naked’ wedding cake (a cake without fondant), a small suitcase with flip flops for the women to wear instead of their heels, a photo booth outside complete with gorgeous props, a sweet table with printed paper bags, napkins that had been folded into bunny shapes and small bottles of sloe gin as favours.

As an extra surprise (which most of the guests didn’t know about in advance), the couple had hired a live band for the evening’s entertainment and they turned out to be incredible, playing a brilliant set and adding in mash-ups of several songs together throughout, which really worked. I got to spend some time with some friends from university that I haven’t seen in a number of years, I took advantage of the flip flops and by the end of the night I was on the dancefloor with the rest of the guests (and the groomsmen who had moved their ties from their necks to around their heads by this point) while screaming along to Bon Jovi’s ‘Living On a Prayer’ and drinking from a bottle of cider. 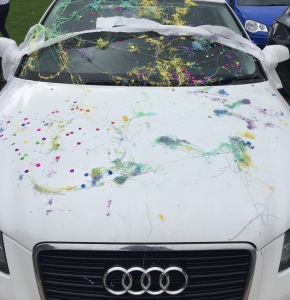 What can I say? I like to keep it classy.

The next day, we sat down to a lovely breakfast, and then the couple and their families started to pack up and get ready – they had to travel to Heathrow as they were going on their honeymoon that evening… An African Safari. How amazing. I was surprised at how awake most of the guests were – considering the inebriated state a lot of them were the night before they had managed to recover quite well!

We left before they did, but we saw that they would have had to clean their car as it had been thoughtfully decorated the night before…

Congratulations Gemma and Matt. It was a privilege to spend your special day with you – wishing you a lifetime of love, health and happiness together… Xx

My favourite picture of the day – take by The Bloke

10 thoughts on “A Wedding at Sherborne Abbey”