Those who know The Bloke in his personal life will be aware of his passion for photography, in particular of his love of landscapes and British wildlife.

I’ve been wanting to do something as a surprise for him for a while, so when I discovered Nuneaton and Warwickshire Wildlife Sanctuary I was delighted!

There’s quite an inspirational story behind the sanctuary and it’s owner, Geoff.

In February 2001, an injured swan was taken to a veterinary clinic in Warwickshire. The swan was injured, but needed only a week of rest before it was able to be released back into the wild. However, there was nowhere in the area for the swan to rest and receive care, so it was put to sleep. This was when Geoff decided to set up the sanctuary.

Geoff had worked as a security guard for many years but was injured at work and forced to retire. He used his savings to transform his garden into a haven for wildlife and has never looked back.

When looking at their website I discovered that there are a number of rescued animals who are permanent residents due to the fact that they cannot be released back into the wild, including foxes and deer, and after a conversation with Geoff and his daughter, Emma, they very graciously allowed The Bloke and I to visit for a few hours so we could spend some time with the animals and see all the brilliant work going on.

The Bloke initially had no idea what we were doing – he had been told that he had to bring his camera and wear comfortable clothes, and then he saw the foxes. Out came the camera, and his face was the highlight of my week.

The sanctuary houses a whole plethora of animals – foxes, snakes, deer, owls, hedgehogs… They all have their own spaces and it was immediately obvious that Geoff knew the name and need of every specific animal. There’s a little animal hospital on site where sick and injured animals are treated (they also have a partnership with a vet) and areas where animals that are due to be released are kept separately. Volunteers devote their time to feeding and caring for the residents, and as a result all the animals are in fabulous condition.

I was instantly in animal heaven and made a beeline for Dusk, an elderly fox who was cuddling her Tigger toy. She clearly wasn’t fazed by human interaction and allowed me to stroke her, which was incredible. There’s a number of foxes there who cannot be released back into the wild – they have imprinted on humans after being taken from their mothers, there was one who was deaf, others that have been found tied to railings or poisoned – and Geoff takes them in and gives them a home. He explained that one fox was released, but followed the sanctuary van back and got back into her bed quite happily, so she has stayed. 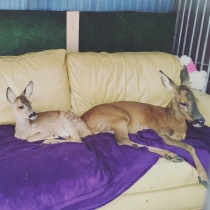 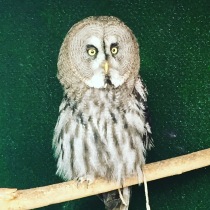 After stroking the foxes, I went to have a look at the other animals. The deer that had been wandering round when we arrived were a little wary of us, so they went back to their area and casually relaxed on a couch, which made me smile. There were some beautiful owls, and an albino magpie. A few geese walked around next to us, and a parrot (that is known for it’s foul language) said hello as it was being fed. I laughed as we were introduced to a rather handsome looking chicken called ‘Tikka’ that was pottering about – clearly the chicken couldn’t have cared less about our presence and strutted in front of us as if he owned the place.

And then Geoff brought a cub out – an 18 week old fox cub named Scooby that had been recently rescused, and I watched The Bloke turn to mush. There was no fear at all – Scooby sat quite happily in Geoff’s arms as we stroked him and took pictures – an experience of a lifetime.

The sanctuary has grown immensely, rescuing 36,000 animals since 2001 and for Geoff and his team, it’s a 24/7 job. He gets call-outs at any time of the day or night in all sorts of situations, sometimes requiring a police escort, and it was eye-opening to see just how much time they devote every single day to helping animals in need. Some of the animals are taken out as part of educational talks and visits at animal and pet shows.

None of this is easy and cheap to run, needing approximately £28,000 a year to keep going. The sanctuary is a registered charity and they have to do a huge amount of fundraising and ask for donations of blankets, toys and food for the animals.

Here’s where you can help – click on the link here to find out how you can donate to an absolutely amazing cause.

The sanctuary isn’t open to members of the general public as such, but appointments can be made upon request.

What an amazing day!

Disclaimer: I was not asked to provide a review, positive or otherwise. This is a truly valuable cause that deserves promotion.

52 thoughts on “Rescued Animals at Nuneaton and Warwickshire Wildlife Sanctuary”