I haven’t been on the blog much at all over the last week or so, mainly due to this:

This is Dougal, my sister’s dog, who I have been looking after while she went on holiday. My sis lives quite a distance from me, so I moved into her flat where (for the first time in about nine years), I was living on my own for an extended period of time.

I’ve never been bothered or upset with my own company. In fact, I quite like it, but after living with The Bloke for so long it felt… odd. The longest we have ever been apart (even when we just living together as housemates) is two weeks when I was stranded in America on a school trip, and since then there has been the occasional week or few days here and there, but that’s become more rare as time passes.

There were a lot of positives about being away – Dougal is a joy and his needs meant that I was forced to get up early in the morning and then go out again in the afternoons for his walks, so I got more exercise than normal. His happy demeanour and insistence on playing ‘let’s run around like a mad thing with Auntie Suzie’s socks while she is having a shower’ and ‘let’s accidentally lock myself in the bathroom and give Auntie Suzie a minor heart attack by making her think I’ve got outside’ also kept me on my toes. I had free reign of the tv, along with extended channels that I don’t have at home which allowed for binge watching of the nonsense that The Bloke normally detests (Helllloooooo America’s Next Top Model).

It was also very cute when my sister and Squidge – my niece – came round to visit. Squidge had never met Dougal before, but he was very sweet as he was hovering near her, hoping that she would drop one of the rice cakes that she was eating. I was surprised at how disinterested she seemed to be – most babies are completely enamored with animals, but she seemed to be more bothered about her food.

She takes after Auntie Suzie… I managed to catch her off guard and get this picture of her munching away at her rice cake.

Again, she takes after Auntie Suzie.

What I found most interesting is just how quickly I reverted to who I used to be when I was living in my own before, both as a student and when I had just started my teaching career. Normally, when I am working from home or home during the holidays I will make sure that I have a proper meal ready for when The Bloke gets home from work (he’s never asked me to, but I enjoy it), so my day follows a particular routine. On my own, however, I ate when I was hungry, and what I ate was generally quick and easy (and quite unhealthy if I’m being honest) and didn’t involve much preparation or washing up. Dinner for One. I haven’t done that in a long time. My shower has been later in the evening, my bedtime has been even later – 2am on occasions – and I have indulged in an afternoon siesta (accompanied by Dougal) several times. I have found myself watching ridiculous Hallmark made-for-tv movies after I have done all my admin stuff and talking to the dog as if he actually understands what I am saying to him in the same way I used to talk to the cat I owned (to be fair, he does actually understand certain words – ‘chicken,’ ‘ball’ and ‘walkies’ always provoke a reaction from him). 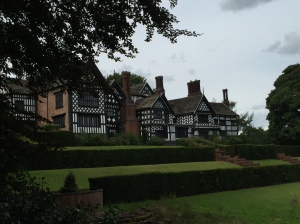 I also met up with my mum the other day. She has two dogs and brought them up so we could take them and Dougal out for an enormous walk. We were lucky to find Bramhall Park, a beautiful hall and gardens where we were able to walk the dogs for miles and catch up. Dougal was an absolute trooper – his little legs powered through and he was so shattered that he slept for the rest of the evening and through the night.

And then, I was tagged in a post via Facebook of the ‘For the Love of Sci-Fi’ convention that is happening at the end of the year in Manchester. There was one specific reason why my friend had thought of me: Dolph Lundgren, the most beautiful man ever created and the subject of my 30 year adoration, is appearing and there’s an opportunity to get a photograph taken with him. And then, my mum offered to pay for the photo as a birthday present, and I bought the tickets.

So, after 30 years, I’M GOING TO MEET DOLPH LUNDGREN. Poor guy… I hope I don’t cry on him…

42 thoughts on “Dougal, Dinner for One and Dolph Lundgren”