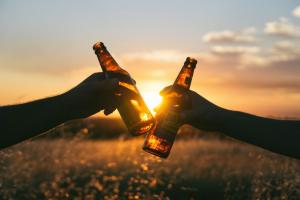 Last night I was in a bit of a mess. We had been subjected to excessive noise from our new neighbours, and because of the awful experience we have had in the past I ended up having a full blown anxiety attack.

I decided to bite the bullet and spoke to one of the lads this morning. I timed it so I caught up with him when he was leaving the house for work and asked him (in my most disgustingly nice and polite voice) if he had a few minutes. I explained about what had happened at the previous house and why this still has such an impact on us now. I then told him that I felt really awful about having to say anything to him, and that it wasn’t about hating music or singing as my degree is in music and I taught music for nearly ten years, but the volume of it and the times they played it was affecting our ability to relax in our home, which should be a place of sanctuary. I explained that the walls were paper thin, and gave the example of when I was in the bath the other night (with the bathroom being upstairs, right at the back of the house) I could hear him singing Elvis Costello’s ‘She,’ from his downstairs front room, and added a joke about it being one of my favourite songs, but that just showed how much we can hear. He blushed. I also decided to be honest and told him that we had been dreading the weekend just in case they did the same as they did last weekend. I also added that we had had several sets of neighbours living in that house and had always had good relationships with them.

I braced myself for a fight or being told to f*ck off, but he was incredibly lovely and apologised profusely. Apparently, they had no idea of how loud they were being and that they had never lived in a terraced house before, and that he was really sorry that they had made us feel like that and wouldn’t ever want to cause any issues. He said he wouldn’t be playing loud music and would make sure that they were more considerate.

Then he gave me a hug.

The sense of relief was enormous – I had been psyching myself up and I was so nervous that I was physically shaking by the time I spoke to him, and I think that he could see it. Then he told me to have a lovely day and got in his car.

A few hours later there was a knock at the door. There was my neighbour, holding two bunches of beautiful flowers as an apology. He gave me his phone number and said to text him any time it was too much.

It was such a lovely surprise that I almost bloody cried on him. It turns out that some people occasionally defy expectation. Perhaps I need to stop being so cynical…

Here’s to a music-free weekend!

Thank you all so much for your messages – I haven’t had chance to reply to them all as yet but they are all greatly appreciated!