Nearly two weeks after we got married, it’s been a time of enormous highs and some crashing lows.

I’ve been loving all of the pictures that we have been getting from our friends and family from the wedding. Some of them are gorgeous, some are less that flattering, so I’ve been collecting them into folders and I’m going to make a montage of all the awful ones and hang it on the wall. It still hasn’t quite sunk in yet.

However, it didn’t help that two days after we got married The Bloke was told that Ofsted (the national inspection service for UK schools) would be coming to inspect the school he works at. Anyone who has ever worked in an educational institution in the UK knows that there is nothing more stressful than Ofsted – I’ve seen grown professionals reduced to tears – and as an IT Technician The Bloke receives enormous amounts of tasks and pressure from every area of the school, so he did incredibly long days and was shattered. I felt awful for him – not exactly the start I was hoping for. 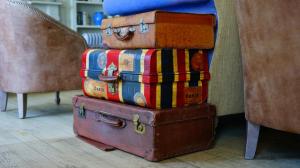 We’ve been excitedly preparing for our honeymoon, getting together the last items that we will need for five days in NYC. Despite being given a large luggage allowance, we are repeating the same process that we did for Barcelona a few years ago and just taking a small, capsule wardrobe of outfits each in a rucksack that we can take onto the plane as hand luggage. We figured that it was going to be cold, we are spending most of our time being tourists and therefore we can get away with taking warm sweaters and t-shirts and just one nice outfit for something posh we have planned. It also means that there is zero chance that our bags would go missing (this has happened to me on flights before) and we don’t have to waste time at the baggage section when we land – we can just take our stuff and go. Because of the time of our flight, we’re traveling down to London and staying overnight at the airport hotel, and it’s that beautiful time of year where the lights have just gone up for Christmas so we can have a nice touristy time in our favourite city too. 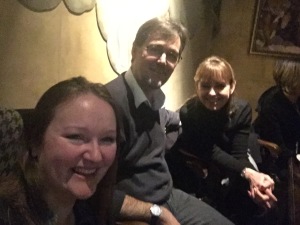 We also had the opportunity to meet up with a group of Blogger’s Bash bloggers in Birmingham last weekend. We met at Bacchus, one of my favourite bars, and it was lovely getting the chance to catch up and say hello. The Bloke was in town doing some shopping so he joined us afterwards, and we indulged in lovely food and had a nice chat. I always find it strange when meeting bloggers that I have known online for years – I’ve met most of the people who were there just a few times before, but I feel I know them a little and the conversation is never boring or stunted as we all know each other’s stories from the blog posts that we read. I think they stayed for a while, but The Bloke and I had to leave early because we had to get ready for the fancy dress 40th birthday party for one of my favourite people, as you do.

The theme was film characters, so we decided that the obvious choice would be to go as Wayne and Garth from Wayne’s World, of course. I managed to find the hat and wigs from eBay and then I bought the rest from charity shops. What resulted was a Wayne and Garth that looked like they had been on a steady 10 year binge of hard drugs and alcohol. The party was fun – there were lots of friends and former colleagues that I hadn’t seen in years and some that came to the wedding but I didn’t get much chance to speak to them properly at the time, so it was great to be able to catch up with them all and find out how they were doing. I found it quite amusing that some of them didn’t recognise us because of our outfits – we were staring at one former colleague and even though she looked directly at us she walked past and The Bloke had to go over and say hello at the bar. 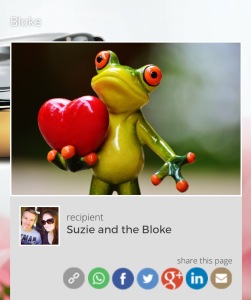 The other day, I was working through my social media checklist and saw I had a Facebook message. I was then greeted by a whole group of members of my Facebook group who had secretly been collectively scheming and squirrelling a donation for The Bloke and I for our wedding and honeymoon, and I was presented with an enormous sum of money. It isn’t often that I’m lost for words, but this was one of the rare occasions where I had no idea what to say, and I knew that thank you wasn’t enough. What an unbelievable surprise – we were totally gobsmacked. Em, Lorna and everyone who contributed – thanks so so so much… Yet another reason why the blogging community is a wonderful place to be, and I’m so lucky to know them!

And then, we had some devastating news. Our friend and former colleague passed away earlier this week. She came to the wedding and I spoke to her last Saturday via Facebook messenger, and on Monday of this week she had a sudden and unexpected illness and passed away a little while later. She had only retired a few years ago, was a devoted mother and grandmother and loved by everyone who worked with her – staff and students alike. It was a total shock, and I’m still reeling from it. She was such a fabulous woman – never forgot a birthday, always had a kind word and offered many (including myself on numerous occasions) a shoulder to cry on, and the outpouring I’ve seen since her passing has shown just how many lives she touched. I’m so grateful that I got the chance to see her and tell her how much she means to us before she passed, and that she saw so many of her friends. She very kindly gave us some money for the honeymoon as a gift so we’ve made a donation to the RNLI (of which she was a huge supporter) in her name and we’ll have a drink for her when we’re away.

Jan, we love you and thank you for everything that you have done for us… We’ll miss you and your friendship very much. May you rest in peace xx

I’ll be away from the blog for a while – I hope you all have a calm and peaceful time and I’ll catch up with you soon!

48 thoughts on “Highs and Lows”