As I sit on the train on the journey back from Heathrow I can’t actually believe our honeymoon is already over. We stayed for 5 days in New York, and with the time difference it worked out that we did a day in London beforehand too.

Getting to NYC was a bit of a nightmare, and the flight back wasn’t much better, but the rest has been totally and utterly fabulous. It’s been a whirlwind of travel and people and sightseeing and noise and VERY cold weather, and I’m absolutely exhausted, but it was a wonderful experience. My back aches, my feet and legs hurt, my gloves are shredded but my phone and The Bloke’s camera are now full of pictures and I have a million memories to cherish and write about.

Here were just some of the highlights… To see the images in a full screen simply click on them.

Staying at a fabulous Premier Inn near Heathrow the night before our flight – it was huge, ridiculously cheap and far better than the ones in the centre of London.

Having my bag fully searched and swabbed for drug residue at Heathrow – it happens every single time that I fly. Not a highlight as such, but it did make me smile. I must have a dodgy face…

Getting a free train ride on the LIRR Train to Penn Station as we used the wrong tickets. The ticket inspector must have felt sorry for us as he didn’t charge us, he just simply told us we had the wrong tickets and walked off.

The location of the hotel – just one block away from Times Square.

Eating a sesame seed bagel with cream cheese every morning for breakfast at the hotel, and then to save some money, taking one each with us for our lunch too.

Watching a couple who had just got married pose for photographs in Grand Central Station with their wedding party.

Grand Central on the first night 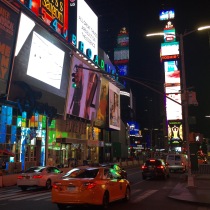 Times Square at about 6.00am, just because…

Being asked by a group of Americans from Ohio what the building we were looking at was. It was the Empire State Building… They weren’t joking.

Discovering that the McDonalds do ALL DAY BREAKFASTS. Honeymoon or not, I indulged in a sausage McMuffin more times than I should probably mention… Yes, a McDonalds sausage McMuffin, before the smutty comments start…

Going to Times Square at 5.30am when there was virtually nobody there and then watching the sun rise down East 46th Street.

Standing in front of the Monet at the MOMA.

Monet’s Waterlillies at the MOMA

Visiting Tiffany’s, having a nice chat with the lift operator and adopting my inner Audrey Hepburn, without the croissant.

Deceiving the squirrels in Central Park into thinking that I had food for them. I didn’t, but it took them all while to catch on, by which point they had come close enough for me to give them individual names and take pictures.

Seeing my first ever wild racoon. It looked like it was up to no good, but it was incredibly cute!

The Temple of Dendur at The Met

A friendly squirrel – I called him Arthur. He looked like an Arthur.

The view from inside the MOMA

Drinking a cocktail on the rooftop bar of our hotel and toasting to the memory of our friend, Jan.

Watching the sunset from The Top of the Rock. Incredibly romantic – I think this was my favourite bit.

Discovering an abundance of Snapple and proper pink lemonade. It’s not as easy to find in the UK, and it’s much more expensive.

Standing outside The Nederlander Theatre (the original home of RENT) with the opening song in my head.

Having a lovely chat with Alexander, the Empire State guard on the viewing deck while I got over my initial fear of the height…

One of the smaller rooms in Tiffany’s 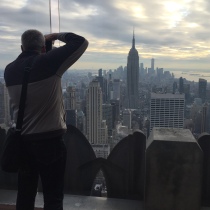 The Bloke at The Top of the Rock

The crowd gathering at sunset at The Top of the Rock

Making our way down to the FDNY 8 building that was used for the Ghostbusters film, only to discover that it is having a major revamp and completely covered in scaffolding to the point we could only see the bottom part. Nobody is going to be calling the Ghostbusters anytime soon.

Paying our respects at the 9/11 memorial. The last time I visited New York, Tower 1 had just started to be constructed and the pools were still an enormous building site, so it was lovely to see it finished and looking beautiful. I couldn’t quite understand the people standing around them while smiling and taking selfies though – that didn’t seem right to me.

Bricking myself as I was eagerly approached by a drugs dog at the Staten Island Ferry Terminal, (despite the fact that I’ve never touched drugs in my life) only to discover that it wanted to play with the large woolly bobble of my hat that I was carrying in my hand. It’s handler just said ‘that’s not for you’ and pulled it away. 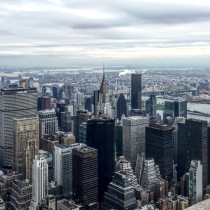 The Kreisler from the Empire State

FDNY 8 – The Ghostbusters Firehouse was undergoing a complete revamp. Gutted.

Alexander, the lovely guard at the top of the Empire State building

Seeing the skyline of Manhattan and the Statue of Liberty from the Staten Island Ferry.

Feeling like I was on a movie set when I saw the classic Brooklyn Bridge shot with Manhattan in the background.

Pano across Madison Square Park and the Flatiron Building

Witnessing the most ridiculous posturing and posing by teen wannabe Instagrammers at Brooklyn Park. The Bloke and I joined in…

Laughing at the further posturing and posing as we walked across the Brooklyn Bridge, listening to the cyclists yell at the tourists to get out of the bike lane and seeing the sunset over the Statue of Liberty. 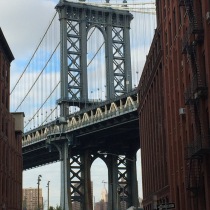 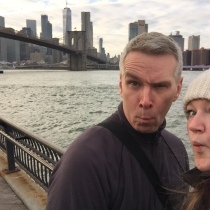 Walking across the Brooklyn Bridge

Figuring out the Subway system… sort of.

Sitting on a bench in the B & H technology store while The Bloke went and got his geek on amongst all the camera equipment he wants.

Watching The Bloke attempt to use the chocolate dispensers at the M&M store, and accidentally ending up with about 2 lbs of them in a bag.

Walking along part of the High Line and then along the side of the Hudson River to see the U.S.S. Intrepid on a gloriously sunny day, even though it was freezing. 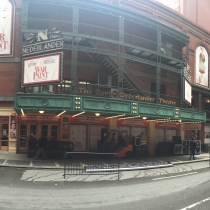 Watching a group of guys perform semi-acrobatic moves around the poles on the subway.

Special mentions to the people who helped us out when they didn’t have to or who were just very nice:

The awesome man with the strong Brooklyn accent who appeared out of nowhere and told us the best subway route to get to Brooklyn from the Staten Island Ferry.

The friendly man who told The Bloke that he should ‘marry me again’ when we gave money to his charity.

The really nice young couple who wanted us to take a picture for them as they posed at the Top of The Rock.

The lovely lady with a child in a pram who showed us how to find the start of the Brooklyn Bridge path.

The kind man who stopped to ask us if we needed help when we were clearly lost on the way back to JFK.

A lovely woman named Kelly from Virginia who was visiting with her sister and 82 year old mother. They had been to see Bette Midler perform in Hello Dolly and were completely overawed.

We did have a couple of negative experiences with the locals, particularly with snobby people in Central Park, the staff at the New York Public Library who were INCREDIBLY rude and an idiot who waited until The Bloke and I got into a revolving door and then pushed it really hard and laughed as it slammed into us. I stumbled a bit but neither of us were hurt, thank goodness. However, in a city of over 8.5 million people, to say that there were only a few negative incidents, (and all but one were silly and minor) is an incredible thing. It was a lot more clean than I expected it to be and I felt safe (although it probably helped that I had a 6’3″ man walking next to me). I was warned in advance that New Yorkers are quite abrupt and rude in their interactions, but I found that most people just kept to themselves.

And now we’re home I’m already thinking about our next trip… I just need a month off for my feet to recover.

THANKS NYC – IT’S BEEN AMAZING…

The Brooklyn Bridge and Manhatten skyline