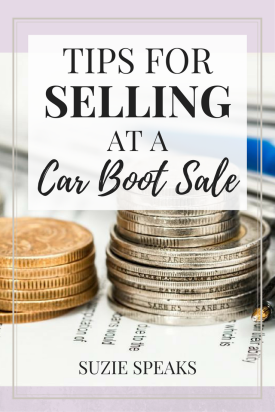 The Bloke and I are hoarders. We’re not obsessive – we don’t keep things like old newspapers, boxes or general household goods, but we both are easily attached to things that we consider to be of sentimental value. As a result, our house is filled with stuff, even more so now the wedding is over.

On a whim, we decided to try and downsize and sell some of our things in a car boot sale, creating some space and hopefully earning some cash in the process.

It was an eye opening experience.

We found a reputable car boot about half an hour away that didn’t require you to sign up and only charged £8.00 per car. We were ruthless and threw together a load of things that we could possibly sell, and at 5.45am we found ourselves stood in a muddy field in freezing temperatures… as you do.

Six hours later, we had sold all but one box of the stuff we had brought, and I had a brilliant time talking to loads of lovely people. I learned a lot, and I was already planning the next one by the time we drove home.

Top Tips for Selling at a Car Boot Sale

1. People will buy pretty much ANYTHING as long as it is in reasonable condition. Electronics, games, books, jewellery, perfume, toy cars, DVD’s, cuddly toys, figures, photo frames and tools are popular. I saw stalls also selling clothes and old children’s toys and accessories, toiletries, make up… Make sure that your items are clean and presentable.

2. Check out the general value of your items and be realistic about what you want to sell them for (nobody is going to pay £5 for an old book). The general rule seems to be to expect about 10% of what you originally spent, but for certain things we looked on eBay to gain a rough estimate of how much people were prepared to pay for them second hand.

3. Once you’ve decided on prices, put the price of the more valuable ones up slightly. Customers love to barter, and if you are setting your prices higher it’s more likely you’ll get the amount you originally wanted for it.

4. Be prepared to deal with very aggressive bargain hunters as soon as you arrive. It was pitch dark as we were setting up our stall, so it was a little intimidating to find ourselves surrounded by hardcore car booters desperate for a bargain, all shining torches in the car and asking if we had things like computer consoles and tools. Be assertive and ask them to wait while you unpack, keep your car doors locked and don’t let them rummage through your boot.

5. Don’t allow yourself to be railroaded into a price. Some people will tell you an item is too expensive, and will start to walk away in the hope that you’ll give in for fear of losing a sale. Ignore them – some of them come back later on and will agree to your original asking price (which seems like a waste of time to me, but standing my ground worked). Just make sure that the amount you want is reasonable, and it will eventually sell if someone wants it bad enough.

6. Make your space look presentable and organised. We took a clean black tablecloth with us, had pre-printed prices and put all of our similar items together in a way that made it easy for people to look at. We had a number of comments from people that it looked nice, and one lady came back to us twice to buy things because she said that stalls with similar items had just dumped them on the floor and made them dirty. If you have more expensive items, don’t have them out on display – put a sign in your vehicle window stating what is available, then you have the control of allowing people to enquiry about it.

7. Say hello and be friendly – we pulled a few people into the stall by smiling and saying good morning to them. I’m not sure whether this is a usual practice, as I saw lots of sellers standing next to their cars with bored expressions, but it worked for us.

8. Take more than you think. We left a whole load of stuff behind thinking that people wouldn’t be interested, but we were surprised on a few occasions by people enquiring about certain items that we had at home but hadn’t brought with us, which meant that we could have sold more.

9. Take lots of carrier bags with you – people always ask ‘have you got a bag?’ particularly with larger or multiple items.

10. Take lots of change. We charged everything using just 50p’s and pounds to make the maths easier, and we took £20.00 worth of pound coins and 50p pieces with us in a tub.

11. Store any notes in a money belt, and keep change safe – we put ours underneath a blanket in the boot of the car so that we were stood right next to it, and we didn’t have a single issue.

12. If possible, don’t go alone. It’s easy for one potential customer to distract you while another steals something. Stand in a place behind the table where you have a clear view of everything.

13. Take a sandwich and a drink and make sure that your phone is fully charged. There’s usually a burger van around but the quality of the food isn’t very nice and they charge extortionate amounts.

14. You don’t need to stay until the end if it goes quiet – you can leave at any time.

What a great way to spend a Sunday morning! Give it a go…

… I’m already looking forward to my next one!

What about you guys? What are your top tips for selling at car boots/ craft sales / yard sales?