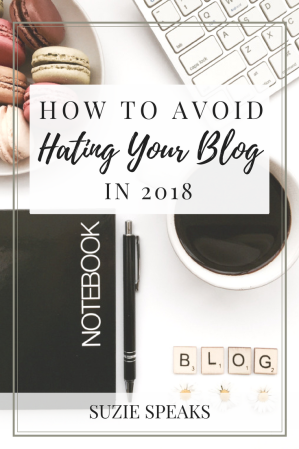 A new year always begins with the same pattern in the blogging world. My emails, reader and social media feeds become filled with targets for the next twelve months and an influx of New Year’s Resolution bloggers will start to appear in the comment section on my blog or across various Facebook groups.

The next few weeks will be filled with an overwhelming amount of conflicting information and I can pretty much guarantee that most will disappear as quickly as they arrived. For some, the novelty of having a blog wears off pretty quickly. For others, there’s a disappointing realisation that thousands of views can’t be achieved simply by pressing the publish button.

However, for the ones that stick it out, it can become a minefield of self-doubt and, at times, a huge knock to their confidence in their writing abilities.

Quite simply, there are two things that bloggers are now up against:

1. The blogging market is super-saturated. I have seen an enormous change even in the last four-and-a-half years, mainly because blogging and vlogging is now a viable career option and as a result there are MILLIONS of posts sent out on a daily basis. The competition, if you choose to regard it as such, is enormous.

2. Consequently, there are very few new and original ideas, particularly within those of certain niches.

It’s a rather depressing thought.

I love bloggers. I love blogging. What began as a therapeutic hobby has now become a lifestyle and a career, and the people within my online world are incredibly important to me (some of them even came to my wedding, and some of them from my incredible Facebook Group secretly squirrelled together an enormous amount of money for The Bloke and I for our honeymoon. I’ll never forget that…).

My community consists of die-hard, enthusiastic and experienced bloggers. However, it’s increasingly common to see numerous people start to become as disheartened as the newer ones…

Indeed, I’ve felt this way myself, particularly this year. After both extremely positive and negative blogging experiences in the last twelve months I’ve become more and more aware of the bullsh*t surrounding the blogosphere… and believe me, there’s a LOT of it.

If a readership and/or number of views doesn’t matter to you as a blogger, then that’s fabulous. I don’t necessarily believe most who proclaim this, but I do know and follow people who genuinely write for themselves for the sheer pleasure of it. However, if (like me), the numbers are important to you (my livelihood actually depends on it) and you really want to develop your blogging confidence and enjoyment in 2018 then read on…

1. Creating a successful blog or vlog and building a large following takes YEARS, unless there’s a large amount of luck involved. This doesn’t equate to how talented someone is – I’ve read endless amounts of fabulously written articles by bloggers with a small following, and just as many posts filled with utter nonsense from people with enormous numbers behind them. Stop looking at their numbers, focus on your own and be prepared for it to become an unpaid, full-time job.

2. Create your own targets rather than looking at those that others have set. If you post once a month, your views are probably going to be a lot less than someone who posts once a week. If you don’t have any social media accounts and hope for the best when you publish, you’re less likely to get views than those who do. Don’t compare your own achievements to the numbers that others have – some large social media accounts have been created by buying followers or by participating in mass follow/unfollow techniques. Each to their own, but don’t immediately always take what you see as being truth and allow this to put you off. And on a slightly different note, accept the fact that some of these bloggers have enormous numbers because they have worked their backsides off on a daily basis to achieve them.

3. Your social media is just as (if not more) important than your blog, and you will need to devote large amounts of time to developing these as you do writing your posts. This doesn’t mean following and then unfollowing others to make your numbers look better, it’s about engaging and sharing with authenticity. Don’t waste your time with those who repeatedly do this to you – block them, don’t take it personally and move on.

4. Lots of bloggers are incredible, wonderful people, and, quite frankly, there’s quite a few that are the opposite. The good ones will support, encourage, share, offer opportunities and boost your confidence. They’re the ones who will message you if you haven’t been online for a while, or who will remember when your birthday is. The not-so-good ones will copy ideas and posts, steal images, lie about sharing posts in link-ups, troll comment sections with links and use others and their resources for self-promotion, often suddenly becoming ‘busy’ when asked for help in return. They’re also the ones who will email you demanding a reblog, swear at the admins in Facebook groups for reminding them of the rules or who will send nasty messages if you haven’t replied to their comments in less than 24 hours. Take the time to get to know those around you, be generous in your sharing and don’t be afraid to say a firm ‘no’ if an entitled so-and-so starts making demands or suddenly forgets how to Google something – this has been prolific this year. After being burned numerous times and witnessing some really disgusting behaviour across various forms of social media this year I now have a blacklist, and it has proven useful.

5. Don’t believe everything that you read – there’s a large amount of smoke and mirrors being used at every turn in the blogging world. The trend for 2017 has undoubtedly been ‘Look how much money I made on my blog’ posts, which I loathe. Of course, I love the fact that people are proud of their achievements, I’m genuinely pleased that there are those who have been able to monetise their blog, and kudos to them. However, some of these posts are incredibly exaggerated and I can guarantee that the creators of these posts don’t stand in the workplace and yell out their salary to their colleagues. Similarly, ignore the posts on ‘How to Get Millions of Views on Pinterest’ when they have a following of 98 people on Pinterest and 0 repins, or ‘How to Get 50,000 Followers on Instagram’ when it’s obvious that the advice should be ‘I spend two hours a day following and then unfollowing people’ instead of the 1,000 words of nonsense actually written in the post itself. Not all advice posts are based on personal experience – again, smoke and mirrors. Earlier in 2017 I read a post on why .org is better than .com, and after a discussion with the author she openly admitted that she had never used .com and her article was based upon opinions that she had read elsewhere. This happens all the time – information is shared around without any research or actual knowledge being gathered first.

6. What works for one does not always work for another in the short term. One of my closest blog friends achieved hundreds of thousands of views from Pinterest this year. It’s taken her two years to get to this point. Two years of research, setting up her account effectively and actively working to build it up, and her most popular pins are ones from a year ago. It’s cliche, but starting something and then giving up 6 months down the line because you haven’t achieved the same results has wasted a lot of your time. Remember: blogging is all about the long haul.

7. Stop chasing the ‘Viral’ post. A viral post is usually about luck. Chances are, it’s not going to happen, even with the best content. Ignore the posts that offer advice on ‘How to Go Viral’ when the author has never experienced it themselves – there’s far more out there of these sorts of posts than you think (See point 6.)

8. Sometimes, a blogging break is necessary. If it all gets a bit overwhelming, walk away and come back to it when you’re feeling better. I’ve had to do this on several occasions recently, and it’s worth it.

9. Finally, remember who it is that you’re writing for. If it isn’t for yourself first, you’re doing it wrong, which something that I need to remind myself of more frequently in the coming year.

Remember: it’s all about smoke and mirrors. Perception rather than fact… and if you allow this sort of rubbish to deter you from thoroughly enjoying everything about your blog in 2018 then you have nobody to blame but yourself.

What about you guys? Have you felt disheartened with blogging or the blogging community in 2017?