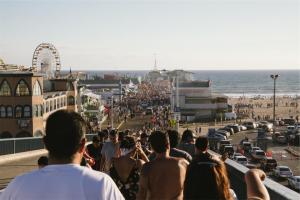 After attending the Annual Bloggers Bash on Saturday, The Bloke and I decided to stay overnight and travel back to Birmingham the following day. We’d got up, had breakfast, went to Chiswick House really early in the morning with Shelley as neither of them had seen it and then made our way back up to Euston to catch the train home. The Bloke surprised me with First Class tickets, and after the post-Royal-Wedding madness I was enormously grateful not to have to battle with my massive bag and the epic amounts of people all trying to get a seat. It was a real treat – something that we’ve only ever done once before on a different train service. We got ourselves settled and comfortable and I started writing up my Bash post on my phone with the intention of loading it up later. It had been a really nice morning, but I was shattered and looking forward to getting home.

About two minutes before the train set off, two women walked into the carriage, sorted out their bags and sat down. One of them then turned their music on at full blast. I thought it might have been an error at first – sometimes when you click on a link or an ad music comes on unexpectedly – but no, we were treated to her playlist in full. Over the top she was shouting her thoughts to her friend.

After a little while I poked my head through the gap in the seats, put on a smile and said,

“Excuse me love, would you mind turning your music down or putting your headphones in?”

That was it. Word for word. With a smile.

And Oh. My. God. You’d have thought that I’d just walked over and spat on her. She went nuts, standing up, swearing at me, screaming and shouting. At one point I think she threw a bag of pretzels at me, which hit the poor couple sitting behind. I took it for a while, then lost my temper and gave as good as I got, which didn’t help. I was informed that I’m a ‘pink faced b*tch,’ (I’m surprised she didn’t say purple by this point based on my anger level) I’m a racist because I’m a white girl who has a problem with a black girl playing music (she could have been bright green with orange spots for all I cared and race was never mentioned – I just wanted her to turn her music down), that she has triggers and people need to know when to shut their mouth, that she couldn’t wait for me to get off the train as she was going to knock me out… The Bloke told her to shut up and she started on him, calling him all sorts of disgusting names.

I contacted the train guard who asked her to move out of the carriage and she refused. He walked off. I was privately tweeting Virgin Trains who informed me that the British Transport Police would be removing her at the next station. Unfortunately, the next station (Coventry) was over an hour away and so we had to endure the rest of the time listening to her go on and on and on about how she was going to kick my arse and swearing at me. She even rang friends and made up stories about the events that had happened – I’d called her racist names, we had got off the train at Coventry and threatened her, The Bloke had stood over her and threatened her… Crazy.

She obviously has issues and it clearly wasn’t the first time – she was loudly shouting about how this was the second time this week and recounting a story about how she had got into a fight with a stewardess on the plane in Thailand. Classy.

Eventually the train arrived at Coventry and the British Transport Police got on. They got the woman on side immediately (I needed those skills when I was a teacher) and successfully removed her off the train without any major incident (although she took the opportunity to swear at me a few times more). They took statements from both of us, and when the officer asked the carriage if anyone could corroborate the whole carriage backed me up. However, when they were asked to give their phone numbers as witnesses there was just a single person who did so, and he wrote his number on a train ticket and gave it to us too. Bless him, what an awesome guy.

The rest of the twenty minutes that was left were quiet. The people in the carriage had a discussion with me about how awful and dangerous she was, which is why they didn’t say anything. I didn’t blame them at all – she looked like her head was about to explode.

It did make me think though: if the situation was different and she had been having a go at someone else, would I have said something? Would I have given my number out as a witness?

Honestly? Probably not, especially with a woman that aggressive.

The problem was, if she had attempted to fight me or pulled some sort of weapon (rather than just a bag of pretzels), there was nobody to stop her except for The Bloke, and that would have upset me far more if he’d been hurt. Nobody checked her ticket to see whether she should have been there – I doubt she even paid for a ticket as when the Police asked for her address she said she was of no fixed abode (despite the iPhone and the trip to Thailand). Nobody came back to check on the situation later on. It was me, The Bloke, a psycho and her friend and a bunch of equally intimidated passengers in a closed carriage in the middle of nowhere. Scary.

Later on, one of the BTP rang me to ask me if I wanted to press charges. I was informed that she had made some accusations against me, I would have to go in for interviews, our witness would then have to be interviewed and I would potentially have to go to court to prosecute her. I said no, mainly because I knew that she would get a slap on the wrist, it wouldn’t change her behaviour and it would be a massive waste of everyone’s time. I was shaken and upset, and while I was pleased that it was over I was a little cross about having to take the high road for an easier life.

I’m finding that the high road is needed a lot more as I age, and it’s frustrating. I’m far less tolerant of people in general, but when dealing with the irrational and/or scary the only way to maintain any form of sanity is to state your point and walk away. Unfortunately, that means that people like that get away with awful behaviour because nobody ever really puts them in check, but I’m taking comfort in the fact that one day this woman will mess with the wrong person and get hurt. I’m sure the more compassionate among us would probably suggest that I should be hoping that she gets help instead, but I’m not feeling particularly compassionate at present.

Of course, for every idiot out there, there are thousands more who are amazing. However, for the minute, I think I’m going to try and stay away from people for a little while. People suck.