The Bloke and I made a decision a few months ago to change our dietary habits. We were both in a food rut – eating poorly, snacking often and gaining weight to the the point where we were both at our heaviest and most unhealthy.

We decided not to follow a specific plan or count calories. After watching the documentary ‘Fat, Sick and Nearly Dead’ on Netflix we were inspired by the idea of a diet of no processed food. We took it a step further based on the fact that I seem to have developed a minor lactose intolerance and The Bloke has rosacea and cut out sugar and dairy too. So, for the last few months we have eaten nothing but fruit, vegetables, nuts, white meat and fish, except for the occasional cheat day that we allow ourselves the chance to eat what we want. We usually don’t eat past 6.30pm, have extra smoothies if we are feeling particularly hungry or have food cravings, and our snacks consist of fruits, nuts and vegetables too. Instead of focusing on the idea of a ‘diet,’ we consider it to be more of a lifestyle change.

The cravings were quite strong at first. I’ve always been far more of a savoury enthusiast, so bread is something that has predominantly been the biggest craving I have experienced (closely followed by a sausage based breakfast from a fast-food chain). And cheese. Oh my gosh, how I’ve missed cheese. I would have quite happily given my right bum cheek for a thick cut slice of warm, doughy bread smothered in melted cheese in those first few weeks. However, it isn’t anywhere near as bad as it was before, and the cheat days really help.

It’s rare that I can do anything in moderation, but we have stuck to it and are doing well. It’s actually been a lot easier than I expected – there’s no weighing or measuring or calorie counting, we’re just not eating as much of the bad stuff as we used to.

And it’s working. The Bloke has lost about 20lbs, and I have lost 11lbs. To be fair, The Bloke seemingly sneezed and all his weight fell off, and he looks amazing. I’m starting to notice a positive difference in our sleeping habits and energy levels too.

I love my cheat days. It gives me something to look forward to, and everything that isn’t allowed on a normal day tastes so much better on a cheat day.

One of these cheat days occurred when The Bloke and I decided to treat ourselves to a meal at Chung Ying Central in Birmingham. We had visited once before as part of a charity event and loved the appetisers that they served, so I was looking forward to trying a mini banquet. 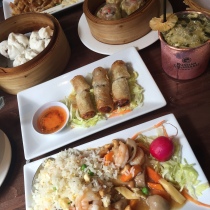 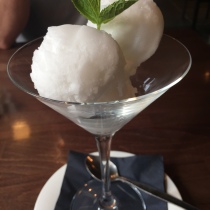 I fully embraced the cheat aspect of my meal and ordered all of my favourite things – cocktails, king prawn and cashew nuts, Vietnamese spring rolls, egg fried rice, steamed dumplings… gorgeous. I was so happy, particularly after the second cocktail. Of course, I was slightly less happy when I was eating grilled chicken and vegetables the next day at home, but those moments where I can treat myself without feelings of guilt or worrying about how much weight I’m gaining.

What about you guys? Have you adopted different eating habits over the summer?