Yesterday we went to the Harry Potter Tour at the Warner Bros. Studio in London (technically, it is known as the Warner Bros Studio Tour, but everyone seems to just refer to it as the Harry Potter Tour instead). It was part of The Bloke’s ongoing 50th birthday celebration, and while I’ve never been a fan of the films (although an avid reader of the books), it was something that I knew he had been looking forward to for quite a while. In all honesty, I was prepared for it to be something that I just ‘did’ that I could add to my list, purely for the sake of saying that I had visited and experienced it.

I take it all back – it was fabulous. The sets, the costumes, the atmosphere – it was amazing just to see everything on show, to the point where half-way through I was resisting the urge to steal a cloak and wand from one of the children wandering around (seriously, shouldn’t they have been in school?) and run around yelling EXPELLIARMUS at everyone in my way.

Want to visit the Harry Potter Tour? Here are a few hints and tips that may help make your journey a little easier.

A specific date and time slot needs to be selected for your visit, and expect for spaces to be filled for weeks in advance (I booked tickets in September and the nearest space I could get was for early November, as October was completely sold out for the entire month). It isn’t cheap, particularly if you’re planning on taking the kids, with prices for 2019 at £43.00 for adults, £35.00 for children and £140.00 for a family of four (but totally worth it), and under 16’s must be accompanied by an adult.

It’s advisable to book a slot as early in the day as possible and to arrive at least twenty minutes ahead your allotted ticket time. The earliest entrance time we could get was for 2.30pm, and we were incredibly lucky in that we arrived over an hour earlier and were allowed to go in as they weren’t particularly busy, which is rare. However, by the time we had finished and were making our way to the exit, the entrance queues were enormous. On average, it takes about 3 – 4 hours to do the entire tour, although The Bloke and I managed it in 2 hours as we didn’t stop to sit down and eat.

The teachers costumes, with Dumbledore in the middle

The Great Hall, decorated with pumpkins! 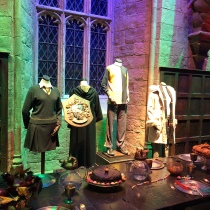 While the exhibition says that it is in London, it’s actually in Leavesden, which is about 20 miles away from Central London.

To save on hassle, petrol and to allow us to be able to relax during our journey there, we travelled via public transport. We got a train to Watford Junction and outside the station there is a shuttle bus service directly to the studios that takes about 15 mins and drops you off outside the main entrance, running every 20 minutes for £2.50 return ticket that can be purchased directly (cash only) from the driver on the day. In order to be allowed on the bus you have to show proof of purchase of your tickets. On the bus there is a short video with useful instructions and things to be aware of when going to the studios.

For travel instructions and directions, here is the link from the official website 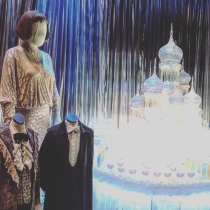 The door to the Chamber of Secrets

Food and drink is not allowed to be consumed during the main areas of the tour. However, there is a ‘Backlot Cafe’ where food (and Butterbeer) can be purchased and if you bring your own packed lunches then you can eat it in this area. There is also a very small smoking section outside.

Upon entrance bags will be searched and every person will be checked with a metal detector scanner.

There are cloakrooms to leave coats and bags near the entrance.

The start of the tour will begin with a short introduction by one of the staff, and a very short film is played, introduced by Daniel Radcliffe, Emma Watson and Rupert Grint (Harry, Hermione and Ron), and your tour begins in the Great Hall.

The tour is separated into two studios, J and K (see what they did there) with the Backlot cafe (along with sets such as the Knight Bus and Privet Drive) in the middle of the two.

There is no time limit on how long you spend in each area except the Great Hall, although be advised that it gets considerably more busy as the day progresses.

The tour is incredibly easy to follow, with the actual sets, props and costumes used in the films, along with interactive exhibits, green screen photo opportunities, art work and graphic examples of the Harry Potter world, with an amazing model of Hogwarts towards the end of the tour. Just some of the sets you can see and even walk through include Dumbledore’s Office, Privet Drive, the Hogwarts Express train, the Forbidden Forest and Diagon Alley. It’s actually a little more emotional in parts than you would perhaps anticipate, particularly around the Hogwarts model, possibly because of the beautiful lighting and sound that accompanies it.

Photography is actively encouraged – you are allowed to take photographs everywhere except the film presentation at the beginning – and you can share your images on your social media using the hashtag #WBToursLondon.

Need to ask a question? Don’t be afraid to speak to any member of staff – this was one of the only major tourist attractions that we have visited over the last few years where every single person was friendly, positive and helpful…

An extra tip – if you’re visiting for a birthday, be sure to ask at the entrance for a birthday pin and you may get an extra surprise at the start of the tour!

Want to see more? Click on the images for the full size! 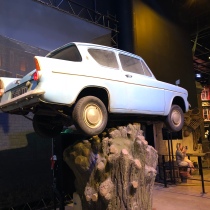 The cupboard under the stairs 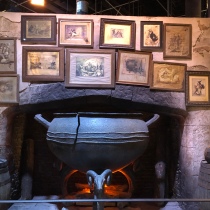 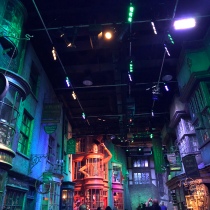 And the most beautiful part of the whole tour…

The insanely impressive model of Hogwarts

Note: I took literally hundreds of photographs during my visit, but made the decision not to share most of them on this post, mainly because the impact of the different sets when I wasn’t expecting them to be on such a grand scale made me physically gasp, and I would like anyone visiting the studios to experience the same thing – I didn’t want to potentially spoil any surprises…

What about you guys? Have you visited the Warner Bros. Studio Tour? Are you a Harry Potter fan?