After my awesome afternoon experiencing a street art tour in Shoreditch with my bloggy friend, Tiffany, I headed on over to Victoria and caught a train to East Croydon to meet another bloggy friend: Donna, the creator of Jot to Jot. We connected a few years ago online and have met several times in person since (she even came to my wedding), and since the birth of her little girl last December I had been promising to visit.

It only took nearly a year. Better late than never I suppose!

The weather hadn’t been kind to me – towards the end of the street art tour the heavens had opened and I (being that person who never remembers to bring an umbrella) was literally soaked to the skin. Donna braved the rain to meet me at the station, we got in a taxi and then – bless her – she immediately gave me some clean warm towels and pointed me in the direction of her shower. After getting dry, dressed and feeling a little more human, I was shown to a bedroom that would make Pinterest interior design fanatics jealous, complete with birthday presents all wrapped up on my pillow (it’s my birthday at the end of the month), and then I finally got a chance to properly say hello to Sam – Donna’s husband – and the baby, who was quite happily sitting on the floor looking all cute while surrounded by a mountain of toys.

I watched the Little One play with her toys (and she earned bonus points for smiling at me – most babies are distraught whenever they are in my general vicinity), we ate a chinese takeaway, I lounged around while we watched The Greatest Showman and then I slept that night for about 10 hours – the longest sleep I’ve had in quite a while.

The following day we watched the Remembrance service on the TV, and then I was treated to a day out at Crystal Park Palace. Of course, I knew about The Crystal Palace that had been destroyed by fire in the 1930’s (Donna’s Great-Aunt actually lived across the road and watched it burning down from her flat – her windows apparently melted), but I had never visited the site or the surrounding park area.

A Pano of the Crystal Palace site

It was an afternoon well-spent. What surprised me was the sheer size of the area where the building once stood – there are remnants of the steps and arches of the upper terrace, and it is enormous. There’s a very small museum on the site with some really interesting information and artifacts from The Crystal Palace, including some of the melted glass from one of the windows. There’s a fabulous view, and with the autumn colours on the trees in the background I could have quite happily spent all day there!

The park itself is enormous, with the sports centre located in the middle. After we stopped in the cafe for a cake (of course), we ventured down to the boating lake and the dinosaurs. Admittedly I was a little confused when Donna first suggested that she would take me to see dinosaurs – I wasn’t aware of a Jurassic Park-esque venue in Bromley. They were actually very cool –  commissioned in 1852 and designed by Benjamin Waterhouse Hawkins to accompany the Crystal Palace after it had been moved from the Great Exhibition in Hyde Park, and were unveiled in 1854 as the first dinosaur sculptures in the world. They are completely inaccurate by today’s standards and knowledge, but have been restored and are now classed as Grade 1 listed as of 2007. The weather was absolutely stunning by the time we arrived, so it made for some brilliant photographs – click on the images for the full size! 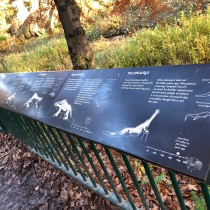 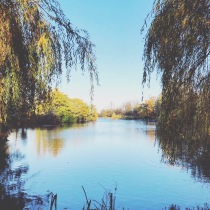 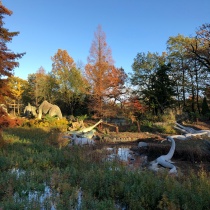 The day was finished with the creation of an epic roast dinner, during which I ate my bodyweight in potatoes.

And I wonder why I can’t fit into my jeans.

An awesome way to finish a fabulous weekend…

10 thoughts on “A Visit to East Croydon and Crystal Palace”