I’m serving some ‘food barrel realness’ after consuming more than my entire bodyweight in Toblerone, cheese, crisps, dip, honey roasted peanuts and potatoes over the last few days. I always find it incredulous how quickly the Christmas Eve / Christmas Day period actually goes, especially with the hype and the level of preparation that goes into the weeks (and sometimes, months) leading up to it, and yet it is already over for another year, seemingly in the blink of an eye.

Our Christmas was spent at home with the cat. I had planned our eating and viewing schedule and got most of the food ready in advance, and for the most part, it all went very well.

On Christmas Eve I took bets with some of my bloggy friends as to how long it would take for The Bloke to fall asleep during our annual viewing of The Muppets Christmas Carol (it was 63 minutes, which must be a record for him), went and fed Paddy (my friend’s bunny who hates me) and attempted to take some Snapchat pics with the cat, which was far more difficult and time consuming than I expected due to the fact that he’s an awkward little monster.

I was, however, particularly excited about the evening. Thanks to Jamie Oliver (whose shows I adore), I decided to step it up a gear and attempt to imitate his version of baked Camembert, accompanied by dough balls as a treat for our Christmas Eve buffet dinner. I’ve baked Camembert many times in the past without a problem, but on this occasion I actually put in the effort of chopping and adding fresh garlic and dried rosemary instead of just bunging it in the oven. Just to be extra classy, I put it in the middle of a tray that also contained frozen filo-based party food. 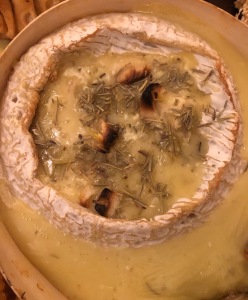 Look at the state of this…

What I created was a hot and stinky cheese apocalypse as the Camembert exploded and oozed out all over the tray, covering half of the party food. Ever eaten a tempura-battered prawn and garlicky Camembert together? Don’t. It’s not pleasant. I also discovered that the chopped garlic that I had placed throughout the cheese wasn’t cooked, despite the exposed parts being slightly burnt, so I had the extra surprise of chewing on a large and still raw clump of garlic that had managed to lodge itself somewhere on a cheese-covered won-ton.

Gorgeous. Even though I’ve cleaned my teeth numerous times since then, I can still actually taste it.

Later that evening as we were going to bed, I was putting a few things in the spare room and managed to knock off the top third of the Lego Ghostbusters House that The Bloke has spent HOURS building, scattering a whole bunch of pieces all over the floor. Those of you who follow the blog regularly will know of The Bloke’s Lego obsession, and I felt like a little kid who had just broken a window. So I did what any supportive wife would do – I sidled into our bedroom while trying not to laugh and had this conversation with him:

Me: Erm… you know your Ghostbusters House?

Me: Well, I may have just sort of knocked it.

Me: It’s not broken, I’ve just separated quite a few of the parts from each other…

(It didn’t help that my explanation made me laugh hysterically and I immediately felt guilty. He rushed in and had a look).

Him: Yeah, you’ve, erm, certainly done a good job on that…

Him: Don’t worry, I can rebuild it.

It’s a good job he’s a patient man, bless him.

I don’t know why I laugh at the most inappropriate times, like when The Bloke drops his plate of food on the couch (the Great Spaghetti-Bolognaise incident of 2014 was particularly hilarious) or the time I saw a strong gust of wind blow a sausage roll out of a man’s hand and into the face of an unsuspecting old lady at Manchester Piccadilly Station… it’s going to get me into trouble one of these days. 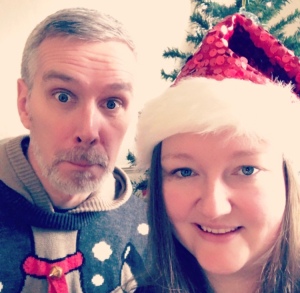 Christmas Day was lovely. I was spoilt rotten with presents as always, made us breakfast in bed and – get this – I did a full two-course Christmas dinner (starter and mains with all the trimmings) in an hour-and-fifteen minutes from scratch. Yes, the turkey was just big enough for two and was pre-rolled and stuffed, requiring just fifty minutes in the oven, but still. Seventy-five minutes, people…

I would like to be able to tell you that we spent the rest of the day playing board games, laughing heartily at old British comedy specials and roasting chestnuts on an open fire while listening to carols. Instead, I spent most of the afternoon dribbling on a cushion in a food-induced coma as I snored on the couch. I remember the first half of Empire Strikes Back, but not much else, until I woke up feeling sweaty and bloated and just in time to watch Paul O’Grady’s For the Love of Dogs, and I cried throughout most of it at all the doggies who were sad and lonely and then cried again when they found forever homes. The cat (who was busy sleeping on his chair) was rather disgruntled as I insisted on giving him a big cuddle, and then after Bake Off (and a large Toblerone) we watched some South Park Christmas episodes and went to bed.

And that was it, Christmas done for another year.

And what a great Christmas it was…

What about you guys? How was your Christmas?

24 thoughts on “Lego Destruction, An Exploding Camembert and a Christmas Dinner Record”