2018 has been a mixed year. There’s been a few personal and professional changes, some of which were not as positive as I would have liked and I’ve allowed myself to wallow in a funk on more than a few occasions, at one point even contemplating giving up blogging altogether. However, when I looked through my Bullet Journal and the photographs on my phone in preparation for this post, I was reminded that this year has actually been full of more incredible experiences than almost of any other.

Here’s just some of the highlights…

Hitting one million views on the blog. This had been something I made a passing comment about in the very early stages of my blogging journey after I had started to receive views on my posts (‘can you imagine if I end up with a million views?’), and in March that’s exactly what happened.

Going on a writers retreat with some of my blogging friends in Southwold.

An amazing week in Scotland – we got to see a Loch for the first time, we got lost in the Cairngorms and revisited the castle where The Bloke proposed two-and-a-half years ago.

Participating in the Escape Rooms Live experience and the Nirvana Room for my friend’s hen party, and then attending her beautiful wedding a few weeks later.

Giving workshop at a local school about social media and blogging.

Changing our eating habits and treating ourselves to cheat days once a week. Food never tasted so good.

An EPIC week in New York – an absolutely fabulous trip during which I experienced the hottest temperature I have ever felt as we were walking across the Brooklyn Bridge.

A writers retreat in Southwold, and proof that I manage to look like a plonker without even trying… 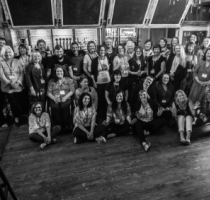 The Bloke and I – NYC 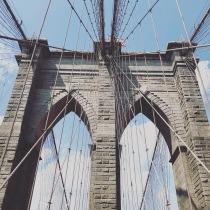 Wandering round Chatsworth for the first time. The Bloke grew up not far from there, and after talking about it for years we finally took a trip up there… stunning.

Annoying Paddy, the bunny who hates me.

For the first time in years, an incredibly hot summer.

The Bloke’s 50th birthday extravaganza – feeding giraffes at West Midland Safari Park and presenting him with a Lego Millenium Falcon, then travelling down to London a week later, staying at our first AirBnB, watching Wicked on the West End, and the grand finale – the Harry Potter Studios Tour. The expression on his face when he first walked into the Grand Hall made my year.

The incredible model of Hogwarts at the Harry Potter Studios Tour 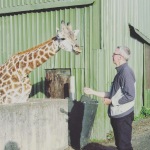 Matilda at the Hippodrome

Rock of Ages at the Alexandra

Some lovely food experiences in and around Birmingham.

Puggy-sitting Dougal, my sister’s pug, for the week.

Decluttering and getting rid of lots of stuff at a car boot sale.

Going to the Toy Fair at the NEC.

The numerous experiences during trips to London during the year, including Notting Hill and Portobello Road Market, Peggy Porschen Cakes Bakery and the Dominique Ansel Bakery, going on a street-art tour with of Shoreditch with Tiffany and staying with Donna in East Croydon, during which we visited Crystal Palace Park.

Meeting up with Tiffany (A Girl and Her Passport) 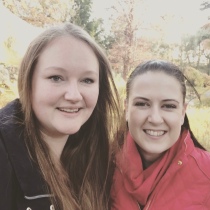 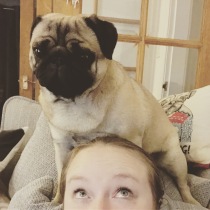 Getting re-acquainted with Dougal, the pug with no boundaries

Being shortlisted as a finalist for Blogger of the Year at the Birmingham Awards, and attending the event at Edgbaston Stadium with The Bloke serving some James Bond realness.

Meeting friends for food and drinks throughout the year.

Surprising my friend at her first art exhibition.

My mum coming to stay for the weekend of her birthday at the beginning of December.

And of course, my boys. The Bloke – my partner in crime – who has been with me through everything and making me laugh, and The Cat, who (despite the fact that he cost us a months rent in vet bills to be told that he is ‘hypersensitive’ and has taken to singing the songs of his ancestors at 4.00am) has been my little friend when times have been tough.

The lovely Shelley (Motivate Me Now)

Some of the girlies at our friend’s wedding

More of the girlies

My little friend and I

What about you guys? What has been your favourite moments of the year?