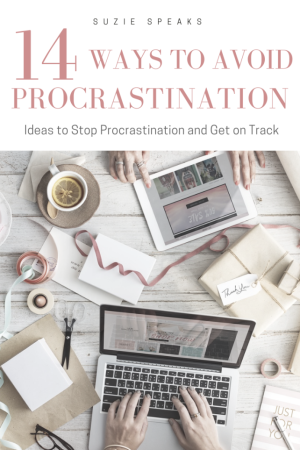 I’ve often referred to myself as the Queen of Procrastination. It has been a problem that began in early adulthood – finding anything and everything I possibly could do instead of something that was important, effectively becoming extremely proficient at doing nothing. Don’t believe me? Here’s how I regularly wasted my time when a deadline was looming.

My procrastination was always at its worst when:

Of course, a million excuses can be used for avoidance and are easy to create, quite simply because they keep us within our comfort zone. An infection in the body or mind left untreated will spread and become more serious and the same notion can be applied to any scenario in the home and workplace – avoidance merely prolongs the fact is that something is not going to go away and may become more complicated and/or stressful the longer they are left. There are always consequences to procrastination – incomplete tasks and missed deadlines jeopardise our employment, missed homework will result in school-applied sanctions, developing a reputation as a procrastinator potentially diminishes the trust others have in us and our abilities, small household chores can quickly turn into an enormous cleanup becoming necessary.

I’ll give an example:

Towards the end of a particularly long and difficult Autumn term during my teaching years, I was informed that a class-sized set of coursework needed to be marked and filed by the first day back of the Spring Term after the Christmas break. This was not an easy job – there were multiple sections for each student, accompanied by cover forms and trackers, and I knew that it would require hours of methodical work. To say that I was annoyed about this was an understatement – I was tired, frustrated and didn’t want to spend what should have been quality time with The Bloke and my family on something that I wouldn’t be getting paid any extra for, despite the fact that unpaid marking is a daily expectation in the profession. Consequently, I put it off. As the end of the holidays approached I developed a pattern, telling myself in a morning that I would start the marking, and then would promptly spend the rest of the day procrastinating, eventually making a half-hearted promise to myself that I’ll ‘do it tomorrow.’ Granted, I had a great time over the holidays, but throughout was plagued with the nagging reminder that this work was due.

On the final weekend, I was angry. I was angry with myself for leaving everything until the last minute, angry that my (much-needed) break had been disrupted by such a high level of work, and angry that I had no more excuses left and nobody to blame but myself. I spent the whole weekend (a total of about 17 hours eventually finishing at 11pm the night before Spring Term started) solidly working, stopping to eat or snap at The Poor Bloke even when he asked the most basic of questions, and by the time I crawled into bed I was tired and stressed, slept badly and went into work the following morning feeling exhausted from lack of sleep and in a foul mood.

Looking back, there was no reason to put myself through this. I had been in the profession long enough to pre-empt this scenario, so could have put extra time in a few days before the Autumn term finished to get as much of it marked and filed as possible. If I had taken the first two or three days to get the work done at the start of the holidays, I could have enjoyed the rest of the time without the nagging reminders constantly hovering in the back of my mind. More importantly, my students had made the effort to complete their deadline, so what was the issue with me reaching mine?

A rational human being would assume that after years of following the same pattern of procrastination I would learn from my mistakes and adapt my behaviour patterns to make life a little easier. Unfortunately, this was just one of endless examples of how I continuously reacted to tasks (even the simple ones) and deadlines during adulthood, unnecessarily punishing myself.

I know exactly why I did this. Quite simply, if I didn’t want to do something, I would fight with an irrational internal response and a feeling of fierce independence (even against myself), and this continued into my thirties because this was the only point in my life where I finally had absolute and total control of what I did and how I did it.

As of a few years ago, I work from home. While it’s a dream-come-true, being self-employed (especially as a procrastinator) is both a blessing and an enormous hinderance – I am in the incredibly lucky position of being able to decide on my day and how I manage my time, but the temptation to put things off or give in to distractions is much higher than if I were working somewhere or for someone else – the person I now have to be accountable to myself.

Want to Avoid Procrastination and Get More Organised?

Plan in advance and prepare. I make a task list before I go to bed of what needs to be completed the following day in my Bullet Journal. This avoids wasting time writing this out in a morning, and I go to bed with a clear picture of what I need to do. I also make sure I have all my tech ready, charged and accessible.

Develop a wake-up routine. I have changed my morning routine. I don’t use a snooze button and don’t allow myself to stay in bed as soon as my alarm has gone off, even when it is cold, raining and dark. Believe it or not, I get up, washed and dressed and I go for a twenty minute walk. It wakes me up, makes me feel a little more refreshed and usually helps me to mentally plan and psyche myself up to start as I’m walking. Most of the time I hate it, but I force myself to do it – I always feel much better by the time I get home.

Actively avoid distractions and work in an environment where the chance of becoming distracted are minimised. As soon as I get back, I eat breakfast and put my phone in a place where I can’t see it. From that point, I don’t check my emails or text messages until I have finished.

Start as early as possible in the morning. I’m far more productive when I start work at 8.30am than if I waste the morning and begin after lunchtime instead, and starting earlier gives me less of a chance to develop excuses and talk myself out of it. Working earlier in the day also allows me to have a guilt-free evening.

Prioritise Your List. I tackle the biggest, most time consuming and potentially stressful task first, and I start immediately after I have eaten breakfast. In order to actually begin I have to almost mentally fight with myself (especially if I really don’t want to do it and the temptation to put on a movie and curl up on the couch is strong), but a reminder of the sense satisfaction when I have completed something often helps.

Break it down. To prevent the large tasks from becoming overwhelming, I break them down into smaller chunks, both in a effort to psychologically seem more manageable and to ensure that I work in a methodical way, often saving myself time.

Set a deadline. Even for the most mundane of things, I give myself a realistic time frame in which I know I can effectively do something.

Be competitive with yourself. I have an extremely competitive nature and use this to my advantage. A lot of my job consists of repetitive daily tasks, so I try and beat the time in which I complete these. While some may feel this is a little silly, I find it incredibly motivating.

Stay hydrated. I always have a large bottle of water with me and remind myself to drink regularly.

Reward your progress. I have set up a reward system to ensure that I celebrate my achievements, however small, at various intervals. The incentive that I have something to look forward to at the end of a day always helps.

Develop daily habits. I have started doing this – gone for a walk, staying hydrated – over a short period of time, and I find that I have become less actively conscious of these things because they are now a regular part of my daily and weekly activities. I use a habit tracker in my Bullet Journal and it’s really useful – here are some great ideas for using habit trackers.

Get an accountability buddy. I have a core group of blogger and writer friends that I use regularly to stay on track with my goals, and we have a decent enough relationship where they can constructively call me out on something that I haven’t done. The discomfort I feel when they do that pushes me forwards.

Take advantage of days where you feel more motivated to get ahead. Sometimes, when I have finished my list for the day, I keep going until I have had enough. I save posts in drafts for my blog, do more Canva images for clients, send out emails that are scheduled for later in the week, out an extra load of laundry in, tidy up or declutter, take a trip to the charity shop, put out the recycling.

Look after your physical and mental health. Try and get enough sleep by developing nighttime routines (bath, earlier bedtime, avoidance of tech), eating healthy snacks throughout the day and exercising, drinking water, talking through your problems with a therapist. The more rested, healthy and peaceful you are, the more positive you’re likely to feel during your working day.

I’ll leave you with this incredible quote from Karen Lamb:

‘A year from now, you may wish you had started today…’

53 thoughts on “14 Ways to Avoid Procrastination”