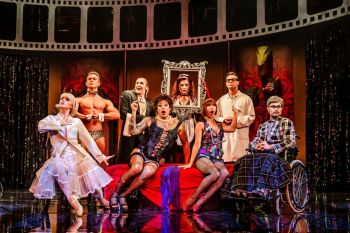 Last night The Bloke and I were invited to go and see the The Rocky Horror Show at the Alexandra Theatre. It’s one of my favourite musicals (this being the third time that I have seen it), but my fifteen year old former self was particularly enthusiastic about the casting of Blue’s Duncan James in the roll of Frank’n’Furter and A1’s Ben Adams as Brad. Additionally, we were treated to pro dancer and performer (including as a pro dancer and winner on Strictly Come Dancing) Joanne Clifton, the ever fabulous Brummie Alison Hammond as the Narrator for the Birmingham shows only, and the incredible Kristian Lavercombe who was also reprising his role as Riff Raff, following more than 1300 performances in The Rocky Horror Show around the world. Indeed, he played the role in the last Rocky Horror performance that I watched and did a brilliant job.The Rocky Horror Show first began life in 1973 before an audience of just 63 people in the Royal Court’s Theatre Upstairs, and tells the story of Brad and his fiancée Janet, two squeaky clean college kids who meet Dr Frank’n’Furter by chance when their car breaks down outside his castle whilst on their way to visit their favourite college professor. The fact that it is outrageous and has a questionable plot doesn’t matter – the iconic songs and fishnets galore provide a brilliant theatre experience, and I couldn’t wait…

Neither could the iconic Bull statue next to the Bullring in the city, who sported a rather fetching costume in celebration of the musical coming to Birmingham this week.

The Rocky Horror Show was fabulous.

Indeed, of the productions I have seen, this was the best. From the sweet opening performance of ‘Science Fiction / Double Feature’ by Usherette Laura Harrison (who also played the vocally powerful Magenta), the atmosphere in the theatre was electric and this continued throughout. What I enjoy the most about The Rocky Horror Show is the audience participation and how the cast react to it – while most of the things that are heckled are so popular that they are now almost a part of the script, occasionally you’ll get one or two that catch a cast member off guard (which is always hilarious), and there were a few moments where I could see a smile developing on their faces.

Ben Adams and Joanne Clifton were incredibly well-matched and did a superb job in their portrayals of all-American clean-cut Brad and Janet. I was more than impressed at Clifton’s vocals in particular. Kristian Lavercombe was a brilliant as I remember – his comic timing made for numerous laugh out loud moments and he is the total embodiment of Riff Raff whenever he is on stage. Accomplished gymnast Callum Evans was a very athletic Rocky. Duncan James was incredible. In my naivety I had expectations of a stereotypical boy band vocal, but boy, can he sing! Strutting around the stage in his heels and suspenders, he commanded the audience throughout with a mixture of camp and sexy in perfect combination.

And Alison Hammond. She’s responsible for some of the most iconic and hilarious TV moments of the last few years, and she walked on to thunderous applause and cheering for one of their own from the Brummie crowd. She held her own with the hecklers, laughing out loud with her hilarious cackle and exclaiming ‘it’s my first night!’ when she read the same line twice and called the audience by the local term of endearment: ‘Bab.’ What a legend.

Indeed, the whole cast were generally superb. There were a few short moments during bigger songs where they seemed momentarily out of sync with each other, and the characterisation of Columbia was so exaggerated and high-pitched on occasions that it was difficult to hear the dialogue, but what was apparent was that they were all super-talented and genuinely seemed to be enjoying themselves as much as we were. The set (complete with a movie reel winding across the top), lighting, sound quality and choreography all worked extremely well.

The Rocky Horror Show is a fun, fast-paced and completely absurd show, and totally worth a watch. It is on stage at the Alexandra Theatre from Monday 13th May – Saturday 25th May – you can purchase your tickets here.

Disclaimer: The Bloke and I were invited to see the show and given two complimentary tickets. However, we were under no obligation to provide a positive review.

9 thoughts on “The Rocky Horror Show at the Alexandra Theatre, Birmingham”