Last night The Bloke and I went to see Hugh Jackman in concert at the Resorts World Arena in Birmingham.

While he’s most famous for his role as Wolverine in the X-Men film franchise and Barnum in The Greatest Showman, his career was built by performing in various musical theatre shows and his world tour entitled ‘The Man. The Music. The Shows’ takes the audience through his life and influences as a performer.

It’s something I have been looking forward to since The Bloke surprised me with tickets a few months ago – I’m obsessed with The Greatest Showman and when we were in New York last year we missed him by about half an hour at the coffee shop that he owns, so I couldn’t wait to be in the same space as someone who has achieved so much and still, by all accounts, remains a down-to-earth nice guy who adores his family.

I wasn’t disappointed. With a sold-out audience of 15,000 people, not only had The Bloke managed to get tickets, but with it had bagged a pair of amazing seats – close enough to see his face but far enough away where the whole stage was visible. 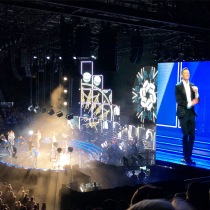 For a seemingly small set-up, it was a massive performance, which incorporated singers, dancers, a choir and a mini-orchestra and band. Along with some of the favourites from The Greatest Showman, he performed songs from Beauty and the Beast (he played Gaston in a production in Melbourne in 1996) Les Miserables (he was nominated for an Oscar for his role as Jean Valjean in the 2012 Hollywood movie), Carousel and one of my favourite songs from Dear Evan Hansen (also written by the duo who composed the Greatest Showman songs). One of the additional highlights was the appearance of Keala Settle, the singer and actress who plays Lettie Lutz (the bearded lady) in The Greatest Showman who performed This is Me, who absolutely brought the house down. What. A. Voice. We were lucky – she is performing in the rest of the European tour.

For a segment in the second half he adopted the character for which he won a Tony Award, playing Aussie singer/songwriter Peter Allen in The Boy from Oz, interacting with the audience and in particular, a woman with incredible pink hair who he pulled up on stage.

Woman: Only with strippers…

It was clear that the band were having a bit of fun with him in this section too, hiding an air horn that they used unexpectedly and made him break character and laugh.

He also acknowledged his Aussie roots, bringing on indigenous Aboriginal people to perform including elder Olive Knight, who sat across from the Australian government when an official apology was given for the treatment of the Aboriginal people, with the message of bringing people together through culture.

He dedicated the show to his wife and children, singing All the Way (the song that served as their first dance at their wedding), he tap danced to AC/DC, played the piano, told stories of how his family and friends had influenced him, and he made us laugh repeatedly. To top it all off, there was a proposal that happened in the audience during a performance of A Million Dreams – he obviously wasn’t aware of it but the person who planned that timed it perfectly.

What an incredible night, and certainly a once-in-a-lifetime experience. I held it together until we got home and then bawled – there has only been RENT and Adele at Wembley that had the same emotional impact, and I loved every minute of it.

Edit: The concert started at about 7.15pm and lasted approximately three hours including a 20 minute interval.

What about you guys? Have you seen a concert recently that blew your mind?

9 thoughts on “Hugh Jackman: The Man. The Music. The Show.”