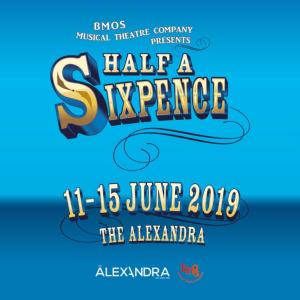 The Bloke and I were invited to see the BMOS Musical Theatre Company performance of Half a Sixpence at The Alexandra Theatre this week.

A much-loved musical comedy based on the novel Kipps by H.G. Wells, Half a Sixpence tells the story of how suddenly inheriting a fortune can confuse everything you thought you knew about life.

Arthur Kipps (played superbly by Daniel Parker) an orphan and over-worked draper’s assistant at the turn of the last century, unexpectedly inherits a fortune that propels him into high society. His childhood companion, Ann Pornick (Annabelle Pilcher) watches with dismay as Arthur is made over in a new image by the beautiful and classy Helen Walsingham (Carys Wilson), both young women undoubtedly love Arthur – but which of them should he listen to? With the help of his friends, Arthur learns that if you want to have the chance of living the right life, you need to make the right choices.

It was indeed an entertaining performance, with each member of the main cast commanding the stage brilliantly. Daniel Parker was perfect in the lead role of loveable cockney Arthur, with a great voice and wonderful comic timing and Annabelle Pilcher was a vocal powerhouse as Ann. Carys Wilson was wonderfully sweet in the role of Helen, Jake Genders as Chitterlow was hilarious, flamboyant and energetic, and he carried the role superbly. I loved the dynamics between the Shop Boys (Neil Ward, Andre Treacy, Alex Nicholls) and Shop Girls (Rosie Harvey, Morgan Bebbington, Charlotte Boyer), and the girls in particular really excelled at multiple harmonies during different songs.

The costumes and choreography were good, and the simple sets and staging worked well. There were a few individual mishaps in the first half in particular with the sound and mics which made it difficult to hear dialogue on occasion and the occasional slip within the chorus, but it was a solid performance with a cast who clearly enjoyed every minute of it!

Music and Lyrics are by David Heneker with Warner Brown creating the new version.

BMOS’s production is by arrangement with Music Theatre International (Europe)

There are still a few performances of Half a Sixpence at the Alexandra Theatre left. For more information and to buy tickets, visit here: https://www.atgtickets.com/shows/half-a-sixpence/the-alexandra-theatre-birmingham/

Disclaimer: The Bloke and I were invited to see the show and given two complimentary tickets. However, we were under no obligation to provide a positive review.