Last night The Bloke and I went to watch Amélie the Musical at The Alexandra Theatre, Birmingham. The 2001 Oscar-nominated film is to date one of the biggest international successes for a French movie and is renowned for its feel-good and whimsical story, which the musical version closely follows. This beloved story of an imaginative and shy romantic with a gift for helping others, in a vibrant re-conception with new orchestrations and has garnered critical and public acclaim leading to a sell-out season.

Amélie is the story of an astonishing young woman who lives quietly in the world, but loudly in her mind. She secretly improvises small, but extraordinary acts of kindness that bring happiness to those around her. But when a chance at love comes her way, Amélie realises that to find her own contentment she’ll have to risk everything and say what’s in her heart. Although times are hard for dreamers, Amélie is someone to believe in…

Amélie, a shy waitress at the Café des 2 Moulins in Montmartre, is played beautifully by the utterly fantastic Audrey Brisson. Startled by the sudden news of the death of Diana, Princess of Wales, Amélie drops a perfume-stopper which dislodges a tile and reveals a small box of childhood memorabilia hidden by the boy who lived in the apartment decades earlier, and resolves to return it to him with the promise to herself that if it makes him happy, she will devote her life to bringing happiness to others. As we follow her journey we are introduced to her world of eccentrics, which leads to some particularly hilarious sequences including an Elton John tribute, a rather fantastic gnome and a large amount of adult toys. I particularly loved the fact that all of the actors provided the music – acting, singing and dancing while playing their own instruments (some performing on multiple instruments during the show), and each were talented and funny in their respective roles. Audrey Brisson is spectacular in the lead role. Naturally comedic and expressive, she holds her own on stage with the presence that is reminiscent of the quirkinesses provided by Audrey Tatou in the film, but still manages to make it her own. Danny Mac’s Nino is warm, sweet and endearing, and has a lovely voice. The set is beautiful and cleverly used and the choreography was slick – what must have been incredibly complicated was made to look effortless. 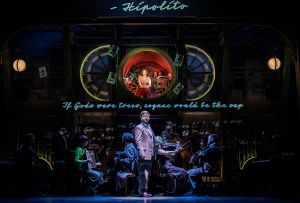 With music by Daniel Messé, lyrics by Nathan Tysen and Daniel Messé and book by Craig Lucas, and directed by Michael Fentiman, Amelie is a beautiful and fantastical performance that is well worth a watch.

Amélie the Musical is on stage at the Alexandra Theatre from Monday 22nd – Saturday 27th July. For more information and to buy tickets, visit here: https://www.atgtickets.com/shows/amelie/the-alexandra-theatre-birmingham/

The Bloke and I were invited to see the show and given two complimentary tickets. However, we were under no obligation to provide a positive review.