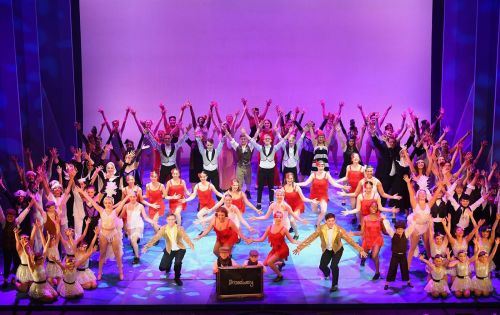 Last night The Bloke attended the Press Night of Singing in the Rain at the Alexandra Theatre. Additionally, I was lucky enough to be able to interview the lead actor in the show (who happens to be an ex-student).

Singing in the Rain is this years’ Stage Experience production, which every year sees over 100 of the brightest young talent from across the Midlands put on a professional show. In just two weeks, with the support of professional industry creatives and technical staff, a full scale production is brought to life on stage. Previous Stage Ex alumni include Brummie comedian Joe Lycett (who performed for several years in the scheme) and musical theatre star Liam Doyle, who went on to leading roles in West End hits such as Wicked, Mamma Mia and Legally Blonde.

Fifteen years since its inception in 2003, almost 2000 young performers have taken part in the prestigious scheme. The ethos of Stage Experience is to provide an opportunity for young people to perform as part of a large cast in a professional scale show, along with technical placements on offer in sound, lighting, stage management and wardrobe.

When the transition is made from silent films to `talkies’ in 1920’s Hollywood, everyone has trouble adapting. Don Lockwood and his partner Lina have been cast repeatedly as a romantic couple, but when their latest film is remade into a musical, only Don has the voice for the new singing part. Kathy, a bright young aspiring actress, is hired to record over Lina’s voice. 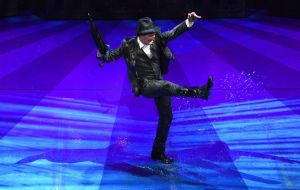 The show was incredibly well-presented, (having been rehearsed in just two weeks), with an amazing 101 young performers of all ages on stage. The four leads – Don Lockwood (Ben Tanner), Lina Lamont (Jessica Walton), Cosmo Brown (Sam Rogers) and Kathy Seldon (Isabelle Kibble) show plenty of confidence. Ben Tanner brings a level of charm and charisma to the lead role and alongside an energetic and comedic performance from Sam Rogers as Cosmo it is clear that they have an obvious rapport. The female performers were superb, with Jessica Walton commanding the stage as the rather hapless Lina, her infamous high-pitched New York accent appeared effortless (along with a beautifully executed off-pitch and screechy singing voice) and an incredible Isabelle Kibble in the role of Kathy who had a truly exceptional voice. With well-timed (and rather advanced) choreography that included tap dancing and, of course, splashing about while singing as it rains on stage, all four brought their own style to their roles in a way that is well beyond their years.

Remembering that this performance had been created within just two weeks, the standard from the entire ensemble was incredibly high and technically assured. All were talented, enthusiastic and professional throughout, concluding with a fabulous finale as all 101 cast members took to the stage with bright and colourful umbrellas and wellingtons, resulting in a vibrant ending and a well deserved standing ovation. 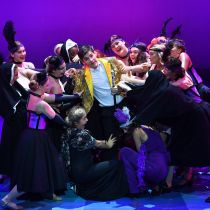 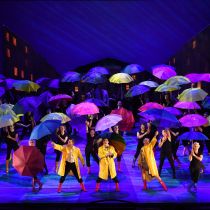 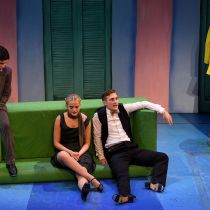 The technical aspects of the performance were also well executed. Mirroring the black and white silent movie clips from the film, the production’s own versions brought lots of laughter from the audience. The set was bright and colourful, the lighting well-placed and aside from the occasional technical sound glitch the whole performance ran seemingly smoothly.

Filled with unforgettable moments, the show has all the charm and romance you’ll need this summer, and not forgetting… real rain!

I took the opportunity to interview Ben Tanner (Don Lockwood). This is his eighth performance with Stage Experience and he is currently studying at the renowned Bird College Conservatoire for Dance and Musical Theatre. He also teaches gymnastics. 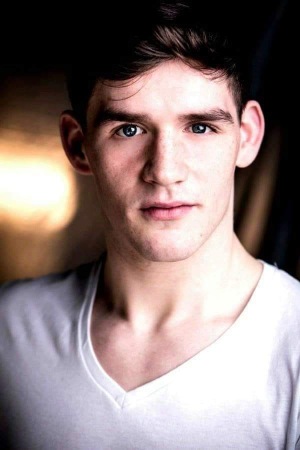 Tell me about your history with Stage Experience

I first got into Stage Experience in 2010 – I saw an advert on Facebook about an opportunity for young people from the local area to perform on a professional stage in a huge scale production. I was very fortunate to gain a place after I applied and haven’t looked back since! With Stage Experience I have now completed eight shows including Singing in the Rain and couldn’t be more grateful.

You’re playing the lead role of Don Lockwood in the production. What research and preparation did you do before rehearsals began?

Once I found out that I had the role of Don Lockwood, my initial research was to go straight to the movie and take inspiration from the iconic Gene Kelly. I’m also incredibly lucky to have seen the London production of the show with Adam Cooper in the role, so I took snippets and ideas from both while adding my own flavour. We were given the scripts about a month before the full rehearsal process began so we could really start thinking about what we could bring of ourselves to our characters.

What has the been your rehearsal schedule when preparing for your performance? How have you been able to fit this into your already busy lifestyle with your studies and gymnastics coaching?

Our full rehearsal schedule only started two weeks ago. On the first day we filmed all of the video effects for the production, and after that it was full steam ahead! We rehearsed from 10.00am until 8.30pm every day, with the performers under 16 finishing at 5.00pm. The rehearsals were jam packed each day, with never a moment to sit down or get bored, and over the last two weeks we had one day off for our amazing technical crew to sort out the lighting, sound and special effects. All of the rehearsals have been well-placed during the summer holidays, and I love doing this as it allows me to continue my musical theatre training. My gymnastics coaching job at the Europa Centre have been so supportive in allowing me to take some time to do this, and I can’t thank all of the staff and students enough.

What has been the most enjoyable part of this year’s performance?

The most enjoyable part for me this year has been the opportunity to take on such an iconic role in my home town of Birmingham. Performing the title number of Singing in the Rain is a once in a lifetime experience and I love the incredible reaction from the audience as the rain starts to pour.

At a young age you’re already an experienced performer. What advice do you have for young people who want to follow a career in performance?

Being nice, polite, hard-working and attentive will always take you far in the Musical Theatre industry. It’s important to be a team player and remember that putting a show together involves every single person from the leads and ensemble to the tech crew and promotional team. The main thing that I learned right from my very first Stage Experience performance was the power of rehearsal. Director and Choreographer Pollyann Tanner has a quote that I always live by: ‘Amateurs practice until they get it right. Professionals practice until they can’t get it wrong…’

Singing in the Rain will be on stage at the Alexandra Theatre until Saturday 24th August. Get your tickets while you can!

Disclaimer: The Bloke and I were given complimentary tickets, but were under no obligation to provide a positive review of the show.