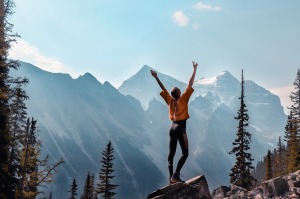 On the 1st January I decided to work on Step One of the next part of my blogging journey, which would eventually lead to Step Two much later on. Neither Step One nor Step Two are actually needed if I’m honest, but I have seen how much more successful Step Two is once Step One has been established for a while. I was quite excited about it – I created a whole bunch of ideas of how I could build on it to make it beneficial…

…and then proceeded to ignore it.

It has been weighing on me for a while, getting heavier each day, so this morning I woke up to the dark and rain outside, had a little tantrum to myself and decided that if I achieved nothing else today, I would do this ONE THING. Just one.

So, this afternoon, I actually completed Step One.

The cat (who moments before had been minding his own business by sleeping on his chair) and I did a celebratory lap of honour around the living room. It was a beautiful moment, for me at least.

The complication wasn’t really Step One, it was actually Step 0.5 that needed to be sorted first in order for Step One to work properly, and Step 0.5 was more complicated than it needed to be. I often find that with most elements of technology – in order to complete one task, twenty-five smaller tasks have to be done first which usually ends up in a long, complicated and stressful day and me yelling and cursing at my laptop in frustration. When I find something difficult I shelve it immediately if I can get away with it – a completely unhelpful habit that I have developed over the last few years.

It might have been two seemingly small steps, but they created such a mental block that I avoided and procrastinated for over nine months. The longer I continued to write it down on my daily To Do list, the bigger both tasks became in my head, and what developed was a daily cycle of goal setting and feeling like I had failed when it wasn’t achieved. It was something that was always in the back of my mind.

It’s been helpful in that it has highlighted a few things that I need to work hard to change in the future, particularly in my own (and apparent lack of) confidence in my own abilities and general apathy that I have developed when it comes to working towards what I want. I love a good lesson or two.

There’s always stuff that needs to be done, but for now I’ll bask in the temporary satisfaction of Step One finally being finished.

Anybody else now singing the NKOTB song to themselves?

What about you guys? Is there one single task that you have been putting off for months?