I often equate a lot of the experiences and opportunities that The Bloke and I have to  being at a bus stop… you wait for ages and then three buses all turn up at the same time. 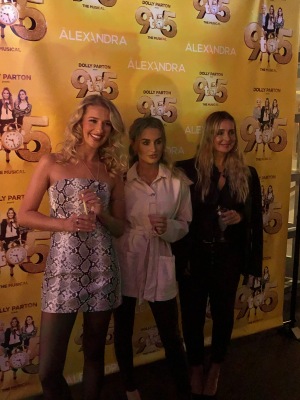 The latter half of last week was exactly that.

On Wednesday we went to see the fabulous 9 to 5 musical at the Alexandra Theatre. What I didn’t include in my review was that we also went to the after party, during which we had the opportunity to meet the cast. I managed to have a little chat with Louise Redknapp, who was lovely and utterly stunning in person (and she hasn’t aged since the 90’s), and get a quick pic with Amber Davis. It was a weird experience – I knew that the show was coming up so I made The Bloke watch the season of Love Island that she was on so he knew who she was, but she looked completely different in person. I’m awkward at the best of times, but when you’re surrounded by incredibly talented individuals that you’ve just seen perform on stage is a little intimidating!

On Thursday we went back to The Alexandra Theatre for the official press launch of The King and I which is coming to Birmingham in December. Annalene Beechey, who plays Anna on the West End and Jose Llana who plays the King on Broadway discussed what audiences can expect from the show and performed some of the songs, which was a real treat. There will be a more lengthy blog post to follow this week about it, but what a way to spend the afternoon! 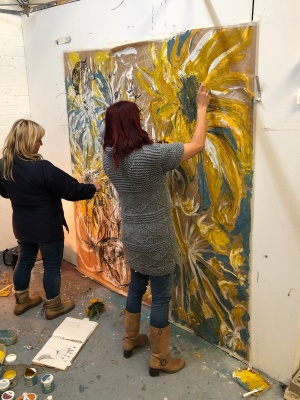 On Friday I was invited to spend the morning with abstract artist (and friend) Penny Mason from Penelope Designs as she and her colleague Simone Chester collaborated on the creation of a 6ft square sketchbook at their studio in Digbeth. I love art (particularly the more abstract forms), but the development of artistic works isn’t something that I have had much experience of, so it was a really interesting morning. Afterwards The Bloke and I thought we would go and check out some of the new street art after the High Vis festival last week, but quickly discovered that a lot of the area was blocked off in preparation for The Peaky Blinders festival the following day, which Primal Scream and Liam Gallagher were performing at.

I’ve been following a Facebook page for Guy’s Cliffe House in Warwick for quite some time after seeing a photograph on Instagram, and have desperately wanted to go and visit. The current house is in ruins and dates from about 1750, and unlike properties in a similar state like Witley Court it is rarely open to the public. However, a few weeks ago I saw that the property was going to be open as part of their Heritage day, and earlier last week we discovered that the weather was going to be spectacular. It was as if the universe had seen to it on our behalf.

And it really was a beautiful day – on Saturday The Bloke and I were one of the first to arrive and had a brilliant time wandering around the ruins in the glorious sunshine. It’s in need of a massive amount of funding to repair it, but as it stood I felt enormously privileged to be able to see something with such an interesting history. There will be a post about this too, but when I have a little more time.

I slept for most of the afternoon, and then again throughout the night. I was shattered.

4 thoughts on “Theatre, Abstract Art and a Hidden Gem”