From the Tony Award-winning creators of ‘Cabaret’ and ‘Chicago’ – John Kander and Fred Ebb – Curtains tells the story of Jessica Cranshaw, the talentless star of the new Broadway-bound musical Robbin Hood – who has been murdered on stage on opening night, and the entire cast and crew are suspects. Time to call in the local detective – Frank Cioffi – who just happens to be a huge musical theatre fan. With a nose for crime and an ear for music, Frank has his work cut out trying to find the killer whilst giving the show a new lifeline.

Jason Manford is perfectly suited in the lead role of Frank Cioffi, with a likeable, modest and almost Columbo-esque charm as he attempts to solve the case and uses his own amateur musical theatre experiences to fix the struggling Robbin Hood show, while falling in love in the process. He is joined by musical theatre and Hollyoaks actress Carley Stenson as ‘Georgia Hendricks’, one half of the the Robbin Hood songwriting partnership who finds herself thrust into the spotlight of the lead role after the murder. Stenson has a sensational voice (with an extensive musical theatre background on the West End including the lead roles of Elle Woods in Legally Blonde and Princess Fiona in Shrek). Rebecca Lock excelled as ‘Carmen,’ the brash producer who insists that the show must go on, Leah West is great in the role of ‘Niki Harris,’ who kept the audience guessing with her intentions and Alan Burkitt was definitely a stand out as a dancer in particular as ‘Bobby.’ Special shout out to Andy Coxon, who had a brilliant debut in the show on the Alexandra Theatre stage as Georgia’s song-writing partner ‘Aaron.’ 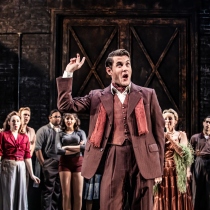 A superbly talented cast, with plenty of hilarious moments (often from the brilliant comic timing of Samuel Holmes as director Christopher Belling), Curtains is essentially a musical within a musical, combined with a musical whodunnit and is cleverly staged to demonstrate different areas and angles of the theatre, all while using a simple set.

The show is quite a lengthy one (the second half is even longer than the first) and while the cast obviously gave their all, many of the numbers and some of the dance sequences were too long and some could have been cut from the show completely without making a difference to the plot. However, despite this, it was a fun evening with brilliant vocals and choreography, plenty of dark humour and worth a watch.

Curtains will be at the Alexandra Theatre until Saturday 9th November.

2 thoughts on “Review: Curtains at the Alexandra Theatre”