This post contains affiliate links, which means I receive a small amount of money if you make a purchase from any of the Amazon links included…

Those of you who have followed the blog for a while will know of The Bloke’s penchant for a good bit of LEGO, so you can imagine his delight when we discovered that a new LEGO store was coming to the Bullring & Grand Central in Birmingham city centre. Imagine his further excitement when we were invited to the preview event of the store on the evening before they opened their doors to the general public.

One of 16 UK stores, this new venue is part of the LEGO expansion across Europe, opening just a week before the new flagship store is unveiled in Amsterdam.

The Bloke was literally a man let loose in a LEGO store. With digital ribbon screens showcasing all the latest products, an exclusive Make and Take Birmingham Bull and Mini Figure to build, bricks to choose from on the massive Pick and Build Wall, ornaments to create for the Build to Give campaign and a whole bunch of sets that we don’t have any room in the house for, I was actually left HOLDING HIS CAMERA at one point while he ran around doing his thing and building everything that he could get his hands on. (The Birmingham Bull figure was particularly cute)

At the front of the store is a LEGO minifigure scanner that allows children to scan their handprint, selecting a Mini Figure for them on a screen. I was Batman, apparently. 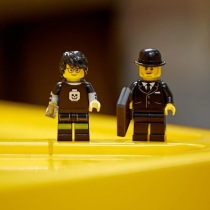 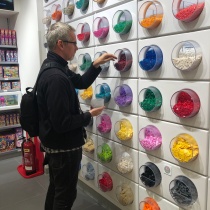 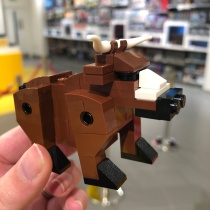 I particularly like the Build to Give campaign concept. For every LEGO ornament built and posted online or in-store, LEGO will donate a set to a child in need. Following the 500,000 sets donated last year the brand have doubled their target for 2019, aiming to give 1 million sets. 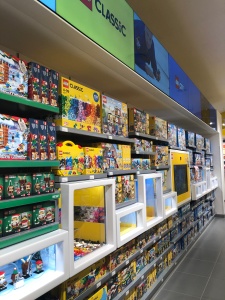 It’s a great store, with lots of space and in a fantastic location on the upper tier of the Bullring (right next to the Bull statue entrance), and a fantastic place to purchase sets that are exclusive to LEGO stores and LEGO online, including the LEGO Friends Central Perk, the Stranger Things set and the Wooden Minifigure.

Looking for some great Christmas LEGO gifts? Check out the links below!

What are you waiting for, Brummies?

12 thoughts on “The Bloke and the New LEGO Store, Birmingham”