It was my birthday last week and my sister, her boyfriend and The Bloke took me to London for the weekend to celebrate. On the first day The Bloke and I explored Westminster Abbey and the Great Hall at the Natural History Museum, followed by a Wagamama.

The focus of the trip was the Tutankhamun Exhibition at the Saatchi Gallery – 150 artefacts from the tomb of Egypt’s most famous King are on display there until May as part of the final World Tour – which could potentially be a once-in-a-lifetime opportunity to see them. Our tickets were booked for 10.00am, and so we joined the queue in the rain a few minutes before.

I’ve always been interested in Egyptian ancient history and culture, so this collection of items was a real privilege to be able to see in person, 100 years after their discovery by Howard Carter.

There were some absolutely stunning items on display, including jewellery, chests and statues of the gods. It was an incredibly busy exhibition (even with staggered entrance times), so it took a little time to be able to see some of the more popular items, but it was absolutely worth it. 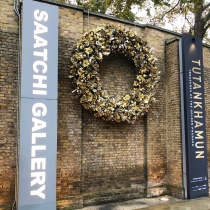 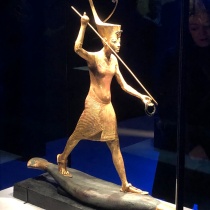 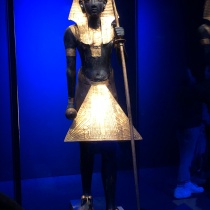 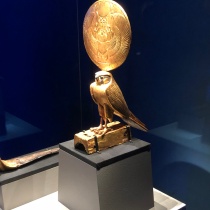 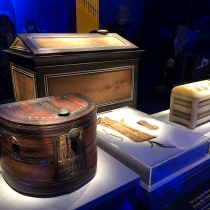 We managed to go around the exhibition in about two-and-a-half hours, and so we went to the Belgravia area which was a short walk away. As a treat I wanted to visit the Dominique Ansel Bakery, where I could indulge in a birthday cronut (croissant donut). I’ve visited the bakery before, and also went to the store in New York when The Bloke and I were there last year. On the way we saw all of the gorgeous decorations that had already been put up in and around the area, including at the beautiful pink Peggy Porschen Bakery, another of my favourites. 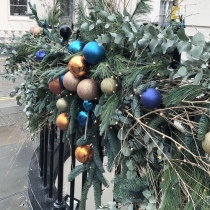 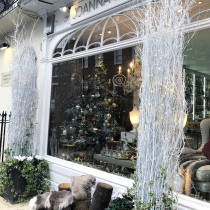 After I had filled my face with my cronut (seriously – they’re about a million calories but totally worth it!) we headed to the Covent Garden area as my sister’s boyfriend had discovered that there was a Bond Exhibition at the London Film Museum. Covent Garden was unbelievebly busy (during which The Bloke put the teenage Instagrammers to shame and made everyone laugh), but the Film Museum just around the corner was a nice escape.

Bond In Motion at the London Film Museum has over 100 individual original items on display from the James Bond film series including concept drawings, storyboards, scripts, model miniatures and full-size cars, boats, and motorbikes. Highlights include the Aston Martin DB10 from Spectre, the Aston Martin DB5 from GoldenEye; the ‘Wet Nellie’ Lotus Esprit S1 from The Spy Who Loved Me; the Rolls-Royce Phantom III from Goldfinger; and the ‘Little Nellie’ Wallis WA-116 Agile Autogyro from You Only Live Twice. It costs just £15 to enter, which was a bargain for what we got to see, especially if (like me) you’re a fan of the films.

Admittedly, I had to stop myself from yelling ‘Hot Priest! Hot Priest!’ when I saw the photo of Andrew Scott, who I completely fell in love with when watching Fleabag. (Incidentally, if you haven’t watched Fleabag yet, you should stop what you’re doing now and don’t watch anything else until you’ve seen both series. Phoebe Waller-Bridge is a legend).

What a weekend! I think my feet are still sore over a week later!

What about you guys? Have you seen any interesting things lately? What are your favourite places to see in London?

7 thoughts on “A Weekend in London Part 2”