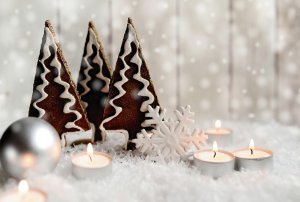 A few years ago The Bloke and I were spending our first Christmas together at home as a married couple. I was beyond excited – normally we celebrated our own Christmas together a few days early, then would travel up north to be with our individual families (mine live in Bolton and his are in Sheffield) and on Boxing Day he would drive across the Pennines and meet me, where we would then drive back down to Birmingham. I spent weeks planning and organising everything – putting up the tree, writing and sending cards and presents, sorting out the food and TV schedule – and by the middle of December everything was pretty much finished, aside from the fresh produce I needed for Christmas dinner.

This year, I decided to try and do the same.

It didn’t quite work out in the way that I had hoped. I seem to have spent the last few weeks doing lots of things, and yet five days before Christmas Day I have a wonky tree, I still haven’t sent out some of my cards and presents, our Christmas dinner is currently going to primarily consist of crackers and sage and onion stuffing (we did have a tub of Twiglets, but got peckish one evening last week and ate them) and the house looks like it has been inhabited by a large bunch of teenagers. Combined with the fact that the next four days are going to be occupied by non-Christmassy things it’s going right down to the wire, which seems rather ridiculous considering that I don’t have children or a job that requires me to leave the house.

I feel like I need some sort of dramatic musical score – perhaps from a training sequence in a Rocky film – over the weekend as I am running about. I’m undecided between the original (which was used in the first three), or the one from my favourite, Rocky IV. Perhaps I’ll put a slow motion montage sequence together as I run around the supermarket while The Bloke yells “No pain! No pain!” at me, followed by a loud yell of victory in my living room with my bags of shopping.

What about you guys? Are you all set for the festive season?