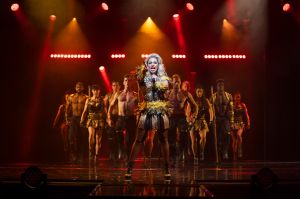 Last night The Bloke and I were invited to see the Press Night performance of The Bodyguard, The Musical at The Alexandra Theatre in Birmingham.

Based on Lawrence Kasdan’s 1992 Oscar nominated Warner Bros. movie starring Whitney Houstonand Kevin Costner, The Bodyguard tells the story of the complicated relationship between former Secret Service agent turned bodyguard, Frank Farmer and superstar Rachel Marron, when Farmer is hired to protect her from an unknown stalker. Each expects to be in charge; what they don’t expect is to fall in love.

Directed by Thea Sharrock with book by Oscar winning (Birdman) Alex Dinelaris, had its world premiere at the Adelphi Theatre in London’s West End in 2012 and was nominated for four Olivier Awards. A sell out 18 month UK and Ireland tour followed, before the show returned to the West End at the Dominion Theatre.

To say I was excited would be an understatement – the film served as the soundtrack for my early teenage years. Unusually, the musical stayed fairly true to the film itself, cleverly incorporating more of Whitney’s biggest hits into the show, which I was pleasantly surprised about.

This is the second time that Alexandra Burke has performed in the role of Rachel Marron, winning lots of critical acclaim. She was a convincing actress, but it was obvious that that she wasn’t quite on form vocally. Starring opposite was Emmy Willow and her truly sensational voice as Rachel’s secretly bitter sister, Nicki, whose emotional performances stole the show and left me wanting more (and I see great things in her future). Ben Lewis did a good job as the serious but charismatic Frank Farmer, managing to create some chemistry with both Burke and Willow. Riotafari Gardner gave a level of cheeky charm in the role of Spencer, Rachel’s son, and I was impressed by his confidence and connection with the rest of the cast. Deviating slightly from the original plot, Phil Atkinson is brilliantly scary as Rachel’s creepy stalker, making the audience jump more than once.

The sets, combined with clever lighting and projections were artistically used to guide each area of the stage that the audience were to focus on, and some elements were reminiscent of the power ballad music videos of the same era as the original movie. Cheesy, but fabulous. There was a minor technical hitch after the first number that meant Scene 2 had to be restarted, but this didn’t take anything away from the overall performance.

This isn’t a musical to be taken too seriously, and at times I felt that it needed an injection of energy. However, it’s a nostalgic trip for many, and for anyone who loves the movie, Whitney, power ballads and pop music, this is the musical for them.

The Bodyguard, The Musical is on stage at the Alexandra Theatre until Saturday 1st February. To purchase your tickets, visit here.

3 thoughts on “Review: The Bodyguard at The Alexandra Theatre”